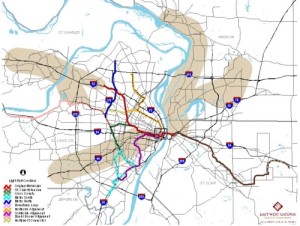 St. Louis County issued the request for qualifications (RFQ) for a MetroLink study through the County procurement process today (January 30, 2017). The RFQ was originally issued through East-West Gateway, but a consensus on selection was not reached.  The study will examine three corridors in St. Louis County – including the portion of the Northside/Southside Corridor that falls within the County’s boundaries – with the technical support of the East-West Gateway Council of Governments.

The 12 month study will examine MetroNorth – which was expanded in November to include the northern portion of the original Northside/Southside corridor not included in the City study, and the area west to the MetroNorth corridor including Ferguson; Daniel Boone – west from Clayton to Westport; and MetroSouth – south from Shrewsbury to I-55 and following I-55 down to Butler Hill.  The MetroNorth expanded route falls within the St. Louis Promise Zone, as does most of the Northside/Southside route falling north of Downtown. Recently HUD awarded nearly a $30 million Choice Neighborhood grant to redevelop the near-North Side neighborhoods.

A consulting team led by AECOM has been selected for the Northside/Southside Study in the City of St. Louis.  This 18 month study will examine a portion of the route known as the Northside/Southside that runs through Downtown St. Louis, extends north along 14th Street, North Florissant, and Natural Bridge to near I-70 at Goodfellow Boulevard, and from Downtown south along Jefferson Avenue slightly past the City limits to Bayless Road at I-55. The study will also identify and analyze an alternative to the Northside Locally Preferred Alternative alignment that would serve the new NGA site.

“CMT, the regional transit advocacy organization, strongly supports efforts to expand our existing public transportation system.  It is critical that existing transit expansion planning initiatives—which in some cases are more than 20 years old—are updated with more current data about potential ridership and financing to objectively determine which projects should rise to the top of the region’s priority list.  CMT notes that the East-West Gateway Board of Directors has not endorsed any route among those identified in the region’s long-range transportation plan.  We have an opportunity here as a region to craft a route that may actually merge one or two corridors examined 2 decades ago. With that said, it is our hope and goal that the next project selected is a regional project providing public transit benefits to both the City of St. Louis and St. Louis County and takes into account not only the rides provided but the economic development and social equity opportunities of light rail ,” said Kimberly Cella, executive director of CMT.

A year ago, CMT released the results of its commissioned Transit Funding Study in partnership with Transportation for America in an effort to draw attention to the overall lack of transit funding which continues to prevent large-scale, capital public transit projects from moving forward in the St. Louis region. The studies being pursued in both St. Louis City and County are significant transit expansion and service innovation proposals. However, the overall lack of funding especially state funding has prevented any of these (and similar) game-changing public transit projects from moving forward.  Findings stressed the importance of looking at a multi-source funding package in order to move any project to fruition.

“Transit expansion requires significant resources and does not happen overnight,” said Rose Windmiller, chair the CMT Board of Directors. “Our community is at a critical point regarding public transportation.  There are identified service needs in this region and it is imperative that we find funding sources to meet those needs and regional consensus on a project moving forward. Transit connects the region to employment, healthcare services, recreation, and each other, and our next priority project should meet the needs of the region as a whole.”