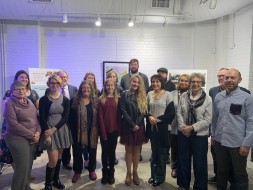 15 winners were selected out of 309 entries, triple the total number of previous submissions

Winning poems created by 15 talented bi-state area poets are being displayed on the Metro Transit system for the next year. The poems were selected from submissions for the 2019 MetroLines program, a regional poetry competition hosted by Metro Arts in Transit that is open to people of all ages living within a 50-mile radius of the City of St. Louis. The winning poems were selected out of 309 poems entered by more than 100 local poets, triple the number of entries submitted in 2018.

Among the winning entries are three youth submissions, one Spanish language poem and a piece that captivates with just 13 words. A common thread among all the winning poems is the passion of their authors who aim to move people with their carefully crafted prose.

Art enthusiasts, poetry lovers and other attendees had the opportunity to meet the poets, hear them recite their winning original works and listen to readings from featured guest St. Louis Poet Laureate Jane Ellen Ibur, during a special reading ceremony and reception held on Feb. 11. The winning poems, selected by a committee of literary and poetry professionals from throughout the region, were reproduced on posters that include visual imagery relating to the subject of each poem and will be on display on MetroBus vehicles and MetroLink trains for one year.

Ted Zimmerman, Interim Director of Arts in Transit, reinforced the significance of the MetroLines program for the winning poets, highlighting that their work will be viewed countless times by thousands of people using the transit system in the coming year. He also noted how the public display of their work is also a benefit for the community.

“The MetroLines contest is a great way to bring life to the arts community within our transit system,” said Zimmerman. “What makes it really exciting for us is that the words these poets have put onto paper really sing to our audiences and provide a great opportunity for people to see words of encouragement as they take their daily trips on transit.”

The poets were motivated to submit their poetry works to the MetroLines contest for various reasons, ranging from giving back to the community and enhancing public spaces to improve others’ transit experience, to increasing their own exposure to the community as writers and having a sense of pride in their work by moving others with their words. And the inspiration for each piece was just as varied.

Andy Smart of St. Louis, Mo., was inspired to enter the contest because he enjoys supporting anything his local community. “We have a solid literary arts community here in St. Louis, but it can always get better, can always be bigger and we can always have more opportunities for people to express themselves creatively,” Smart said.

The inspiration behind his original poem, “Seven to Nine,” stemmed from the replacement of the #8 Bates-Morganford bus route as part of the new MetroBus system plan that was rolled out last fall.

“Love Song for Falling,” a poem by Abigail Fox Green of St. Louis, Mo., touches on relationships. The piece is part of a section of a much longer poem that she had previously written. She especially loved this particular section and modified it to focus more on her relationship with her own self before submitting it for consideration.

“I love this contest because I think it’s a wonderful way for people to be able to practice and try new things,  and ultimately get their work out there,” said Green.

For other winners like Marie Chewe-Elliott of Florissant, Mo., this wasn’t her first go-around at the poetry contest with her entry, “Seasons,” but it was her first win.

“This is actually my third year submitting poems for the MetroLines Poetry Contest, and they’re making me read after the Poet Laureate of St. Louis. I just want to point that out,” she joked.

With three youth winners among the top 15 this year, the contest calls attention to the fact that even young writers who may just be starting to hone their craft can write words that impact those who read them. Riley Gibbons of Maryland Heights, Mo., who wrote “The Future,” and Gemma Fish of Creve Coeur, Mo., who wrote “How the World Revolves” are both in 7th Grade at Parkway Middle School, while Cate Curtis of Webster Groves, Mo., author of “Not Stone” is in 10th Grade at Webster Groves High School.

Among the other 2019 winners who will have their work featured on the Metro Transit system this year are:

Jennifer Goldring, MetroLines Contest Coordinator, noted that without the hard work of supporters and many talented writers, they wouldn’t have had the opportunity to read the record-breaking number of submissions from so many remarkable poets across the St. Louis metro area.

“I’d like to give a final thank you to all the poets who entered and a big congratulations to all the winners who shared their poems with us tonight — and for inspiring St. Louis and countless riders across the transit system.”