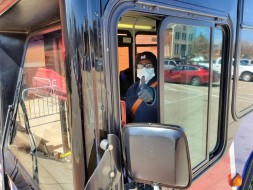 To slow the spread of COVID-19 and minimize potential exposure, Metro Transit continues to strongly encourage everyone to use MetroLink, MetroBus and Metro Call-A-Ride for essential trips only and wear a nose and mouth-covering mask when riding on Metro Transit vehicles.

Increasing Frequency During Peak Daytime Hours To meet ridership demands and support social distancing on buses, Metro Transit will increase frequency on 21 high-ridership MetroBus routes during select daytime hours when there is a higher volume of riders, including 10 MetroBus routes that will operate every 15 minutes or faster during those periods.
 The #70 Grand will operate every 12 minutes from 6 a.m. to 6 p.m., and every 20 minutes at all other times.

Seven MetroBus routes will operate every 30 minutes during select daytime hours, every 60 minutes at other times of the day, and every 60 or 120 minutes during the evening: #34 Earth City | #60 Shepley Lilac | #76 McDonnell Waterford | #77 Village Square | #78 Bellefontaine #79 Ferguson | #97 Delmar

Reducing Evening Frequency for Most MetroBus Routes Due to ridership declining after the afternoon rush hour, most Missouri MetroBus routes will have reduced service frequency during evening hours under this new service plan.

Temporarily Suspending Service Due to limited personnel and vehicle resources, it is necessary to temporarily suspend service on 6 low-ridership MetroBus routes – in addition to 4 routes that were suspended on March 30 – so these resources can be reallocated to transit services that are most needed during this health crisis: 

MetroBus riders who are taking essential trips on the #56 Kirkwood-Webster, #58 Chesterfield Valley and #75 Christian Hospital routes may be able to take advantage of a Metro pilot program that provides discounted Lyft rides for transit users. Customers should contact Metro Customer Service at 314.982.1406 for more information.

Reducing Service Hours Several MetroBus routes will end service earlier in the evening starting April 20 due to low ridership and limited transit resources. This includes the #30 Arsenal and #31 Chouteau bus routes, which will not operate after 8 p.m.

All MetroBus customers are encouraged to check www.metrostlouis.org, Transit app or contact Metro Transit Information for updated schedule information on their routes.