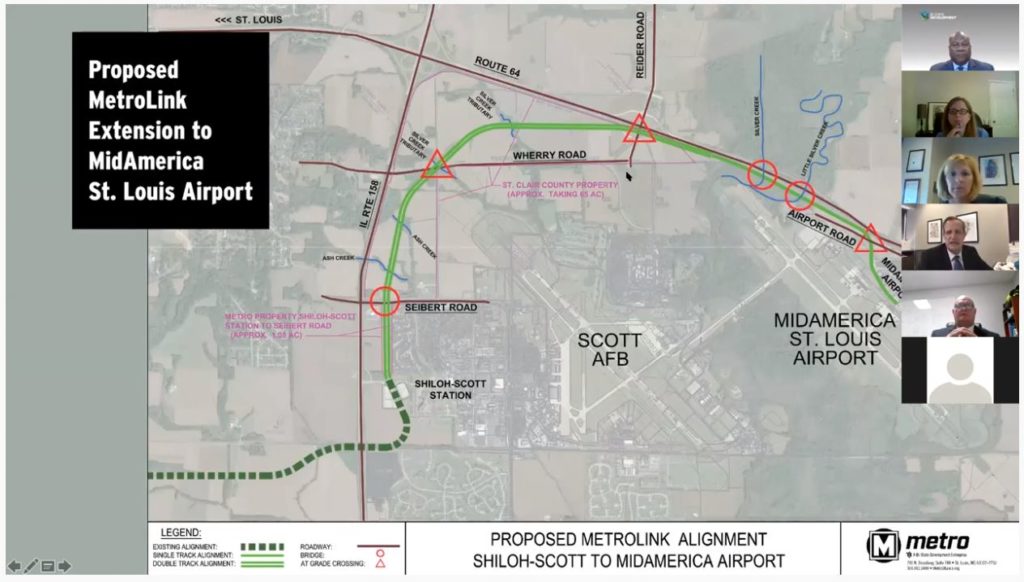 Ridership on the region’s public transit system was up for the first time in 40 months before COVID-19 hit, triggering significant impacts that have required ongoing response. Key learnings from those attending Citizens for Modern Transit’s virtual “Talking Transit” event held today via Zoom included details of Metro Transit’s work to protect the welfare of employees and riders, COVID-19 response efforts and safety and security. To view the event, click here.

Bi-State Development President and CEO Taulby Roach reinforced that COVID-19 related absences have had a challenging effect on Metro Transit’s driver core. “At one time there were 350 drivers and mechanics out with COVID-19 related absences,” stated Roach. “As of June 22, these absences are down to 110. What we need to do is continue to react and do the absolute best that we can to deal with this compelling problem. We’ve been doing that through partnerships and by being fully transparent about the effect of COVID on our organization.”

Metro Transit was awarded a CARES Act grant through the Federal Transit Administration (FTA) in the amount of $142.4 million, which is being utilized to sustain operations and continue to prepare for the safe return of all riders. The transit agency continues to execute enhanced cleaning and disinfecting protocols, provide personal protective equipment for front-line team members, require that all riders wear face coverings and are distributing complementary masks courtesy of the FTA. Metro Transit installed 38 hand washing stations along the system, recently launched a contactless mobile fare payment via the Transit application, added polycarbonate shields on 425 buses and installed signage to encourage individuals to follow CDC guidelines. There are even a couple areas where Metro Transit has been leading the country. It was one of the first transit agencies in the country to set up and require daily employee temperature screenings back in March, as well establishing an employee incentive program to provide extra pay for operators given the very difficult circumstances in which they are working.

“We also adopted the Families First Coronavirus Response Act to allow additional paid sick leave for employees,” said Charles Stewart, Bi-State Development Executive Vice-President of Organizational Effectiveness. “We’ve used it to protect the jobs of our team members. We’ve given them every opportunity to take the time needed for their own personal health reasons and for the welfare of their families.”

Amid COVID-19 challenges, Metro Transit has continued efforts to further transit access. The transit agency is moving forward on electric bus technology and shared renderings of electric transit vehicles that will be added to the fleet starting next year. In conjunction with St. Clair County Transit District, Metro Transit is going to manage the extension of MetroLink to MidAmerica St. Louis Airport.

Tremendous progress has also been made in changing the paradigm of how safety and security is approached on the transit system with a more friendly and customer-based focus. All Transit Security Specialists have been disarmed. New contracted security was established with G4S on April 1, touting very different deployment role through a layered security approach. The second quarter Metro Security Score Card released by East-West Gateway Council of Governments shows progress is being made.

“Metro Transit and the other transit agencies in our region have shown effective leadership and guidance in navigating through these unprecedented times,” said Kimberly Cella, executive director of Citizens for Modern Transit. “We applaud them for their efforts and thank them for providing greater insight into all that has been accomplished and what the future holds for transit in the region.”

CMT hosts quarterly “Talking Transit” events like this one to keep members, elected officials, stakeholders, transit riders and others in the loop on issues and efforts influencing the local transit system. These educational gatherings feature guest speakers and panel discussions addressing a wide range of topics, including transit-oriented development, safety and security, best practices, service changes and more. Special thanks to HDR for hosting this Talking Transit event.