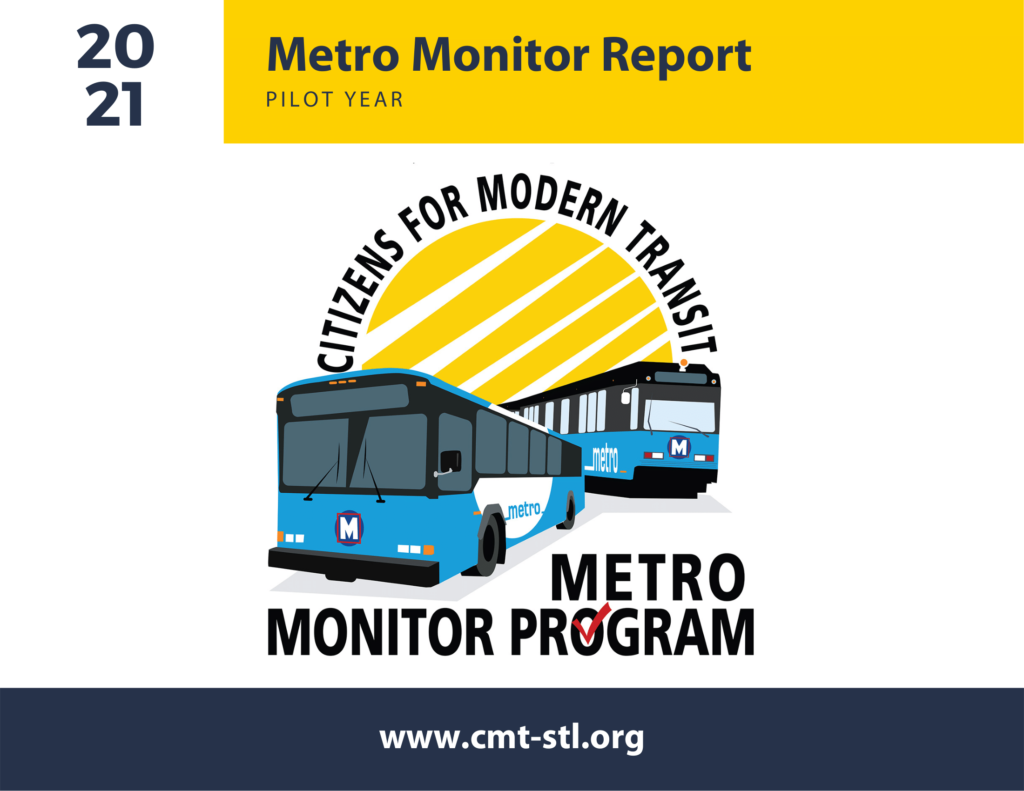 The safety and security of the MetroLink System has been a top, regional priority for the past several years. Significant work has been accomplished through the collaboration of industry leaders, elected officials, police officers, public safety officials and others. As part of this on-going process, Citizens for Modern Transit (CMT) reinstituted its MetroLink Monitor Program with a new emphasis on safety and security at Metro Transit Stations and Centers in September 2020. Over the last year, information gleaned from the reports was provided to Metro Transit Public Safety on a quarterly basis with a focus on safety and security by evaluating security presence at stations and on trains/buses, observing contract and in-house security, determining if fares are being inspected and gauging levels of customer engagement.

The goal of the program is to provide helpful insight as it relates to the implementation of safety and security measures on the system. The program provides the opportunity to hear directly from riders on what is happening on the system. The program is volunteer-based, and CMT is currently has a team of more than 15 volunteers assisting. Volunteers are provided two transit tickets each month, along with a list of items to check up on at each station.

This report reflects one year’s worth of data from October 1, 2020 through September 30, 2021. There were 267 reports filed over that time frame with coverage of 25 MetroLink Stations and 3 Metro Transit Centers. There was a slight tweak to the survey at the six-month point. The questions were not changed, but the way survey respondents could answer them changed to allow more flexibility.

Overall, survey respondents felt safe on the system for the most part even without security present (96% of respondents). Some level of security (law enforcement, G4S contract security or TSSs) visible 33 percent of the time. However, visibility has increased significantly over the last four months. Fare checking when security was visible remains low at about 18 percent on average for the year.

CMT has made the Metro Monitor Survey instrument available online and is in the middle of a transit ad public service campaign for riders. Any rider can now click on the QR code on the ads at the stations to report in about their rides. CMT continues to seek volunteers to provide regular survey feedback (at least two surveys a month) and participate in quarterly meetings with Metro Public Safety staff.

The full report can be found here.