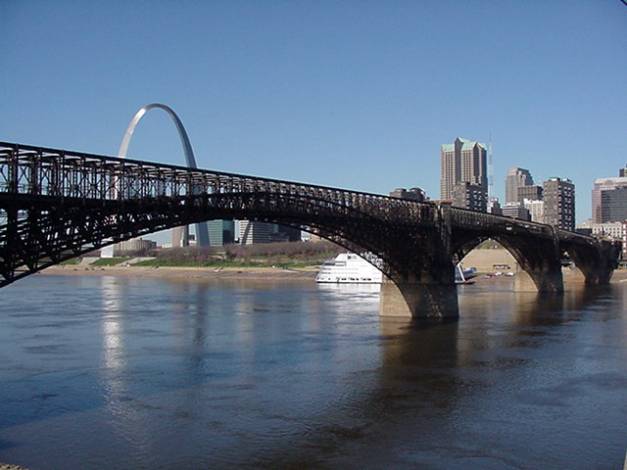 Yesterday, Metro announced that they would be undertaking the restoration of the historic Eads Bridge, the first extensive rehabilitation of the support structure in the 138 years of its existence!  This will be a pivotal project in order to maintain the region’s $1.8 billion transit infrastructure for years to come.

The project is contracted for $36 million, $34 million of which is funded through federal aid.  The City of St. Louis, which co-owns the bridge with Metro, furnished a $4.8 million federal grant towards the project as well.  Only $2.4 million will be coming from local funds.

“The Eads Bridge, designed by James Buchanan Eads, was completed in 1874 and was the first steel structure bridge project in the United States. Now, after more than a century of use, it is in need of major repairs and a significant facelift. This structural rehabilitation project will replace support steel that dates to the 1880’s.”

Metro is committed to completing all of the work by the fall of 2015.

The general contractor for the project is St. Louis Bridge Construction Company, a local firm with extensive experience in working on bridges, highway and railroad structures, dams, levees and spillways. St. Louis Bridge is currently working on three other projects on the Mississippi River and is quite familiar with the Eads Bridge, having completed a rebuild of the deck of the bridge in 2003.

For more information, see the full article on Metro’s website.