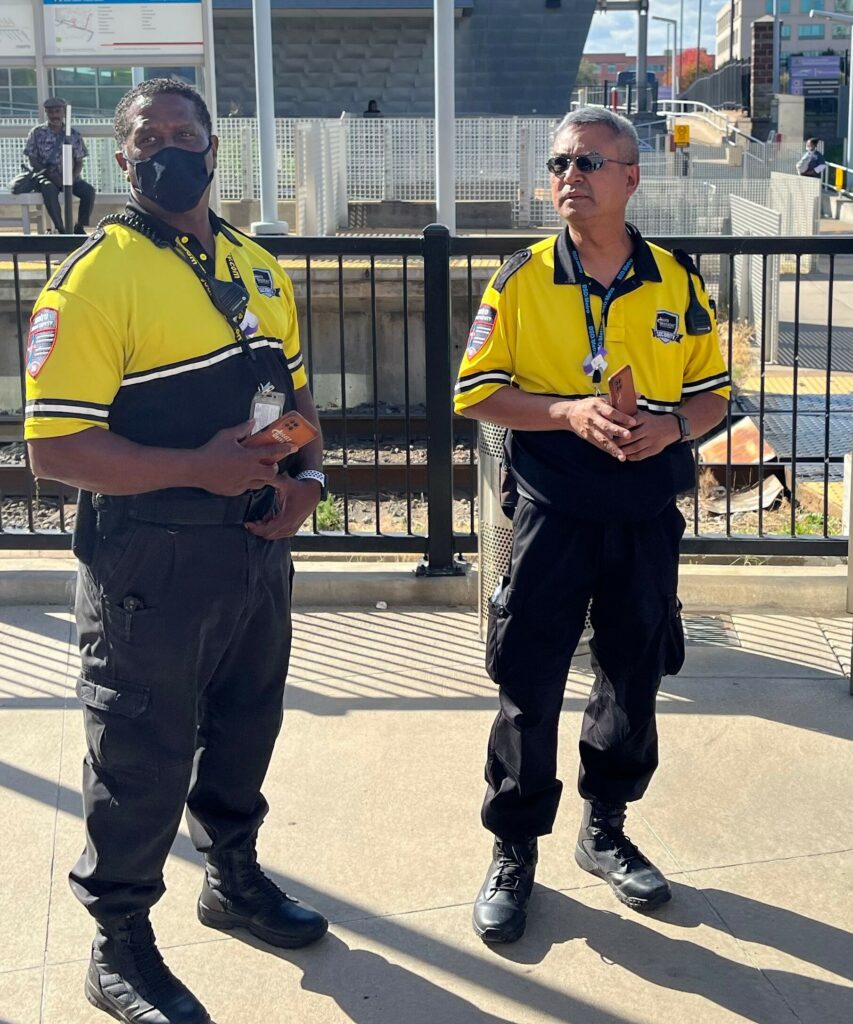 The St. Louis Chapter of ASIS International honored several law enforcement and private security officers, including four members of the security team tasked with
enhancing safety and security on the Metro Transit system, which serves communities in the metropolitan St. Louis area in eastern Missouri and southwestern Illinois. The awards were presented on October 13 at the annual ASIS luncheon to honor security personnel who have distinguished themselves by performing an extraordinary act of service or heroism, risking personal injury or life. ASIS (formerly the American Society for Industrial Security) is the leading organization for security professionals worldwide. Metro Transit security team members receiving awards were Metro Transit Security Specialist John Morning, and Security Officer Jerrell Griffin who works for Allied Universal, which provides contracted security on MetroLink. Two additional Transit Security Specialists Kevin Cissell and Russell Wagner received honorable mention awards. “We have an outstanding security team in place with our Public Safety team working closely with our law enforcement partners and contracted security. Awards like this reinforce that our team members are going above and beyond every day and are committed to delivering the safe, secure system our
customers expect and deserve,” said Taulby Roach, President and CEO of Bi-State Development, which operates Metro Transit. Morning was recognized for assisting with the apprehension of an armed and fleeing murder suspect. He saw an individual carrying a gun running from a crime scene and saw the man drop physical evidence
while fleeing. Morning quickly broadcast a description of the man and his location by radio and secured the evidence for the police. Minutes later, Metro Public Safety

Dispatchers saw a suspect matching the same description and notified the police. They took the suspect into custody without incident. Because of Morning’s actions, a murder suspect was quickly apprehended by local law enforcement. His actions helped to prevent this suspect’s escape and made the community safer by getting him quickly into custody.  Allied Security Officer Jerrell Griffin’s award recognition centers on the de-escalation of a fight involving several individuals, one who was armed, in May of this year. A physical altercation between two groups of individuals that started on the city sidewalk continued to escalate as the four people made their way
to the MetroLink platform. Griffin directed two other Allied security professionals to keep other riders away from the confrontation for their safety and to contact law enforcement. Griffin ordered the two groups who were fighting to leave the property, but instead of leaving, one of the individuals pulled out a gun. Despite the risk to his own safety, Griffin approached the armed individual, and using de-escalation techniques, persuaded him to put the handgun into his backpack, at which time all four
individuals fled. Griffin’s accurate description of the individuals involved led to four arrests and the seizure of a stolen weapon by Metro Regional Transit Task Force officers.

Griffin recognized that the individuals fighting had no regard for other passengers on the platform, or for the passengers on the train that had just pulled into the station. Although normal procedures would be to serve as a witness to the incident for law enforcement, the situation rapidly escalated to a point that, without Griffin’s actions, there was a strong possibility gunfire would have erupted, potentially causing injuries to innocent bystanders. Metro Transit Security Specialists Kevin Cissell and Russell Wagner were recognized with Honorable Mention certificates for their dedication to safety and security, and exceptional service to the Greater St. Louis Community.
“The diligence exhibited by these security officers to keep Metro Transit customers and team members safe is worthy of the recognition received and we’re very proud to have them as part of our team, ” said Kevin Scott, General Manager of Security for Bi-State Development. Bi-State Development operates the
Metro Transit System.