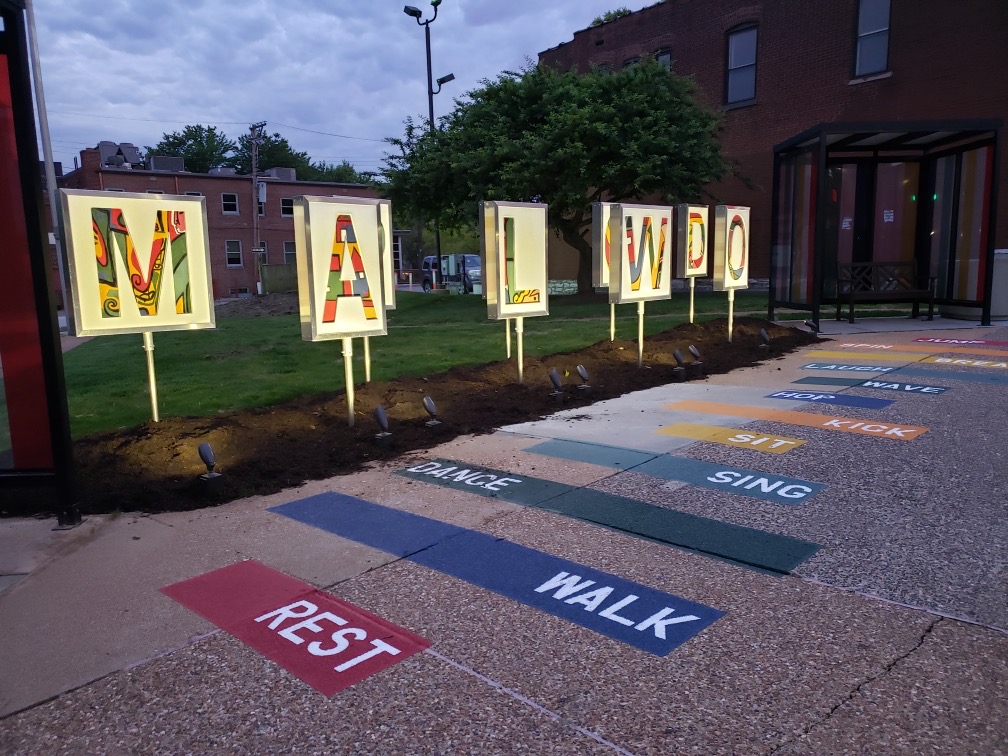 Project Completely Transformed the Maplewood MetroBus Stop into an Active Space that Encourages Play, Cultivates Community and Increases Transit Use

Citizens for Modern Transit (CMT) and AARP in St. Louis have been working to activate the Maplewood MetroBus Stop – located at the southwest corner of Manchester Rd. and Marshall Ave. – in partnership with the City of Maplewood, Citizens National Bank and KABOOM!, a national non-profit that partners with communities to expand play opportunities for kids. The project, known as the “Transit Stop Transformation Project,” is now complete and open to the public. Residents can take advantage of the newly renovated space – located adjacent to the Citizens National Bank parklet – and see firsthand how it encourages active play, cultivates community and increases transit use.  Hear from stakeholders on importance of this project to transit and Maplewood.

The transformed, ADA accessible, Maplewood MetroBus Stop boasts vibrant colors and green spaces. New shelters, a glider and bench have been installed, as well as lighting and better sight lines to improve visibility, safety and security. There is also more waiting space, better access to the parklet and surrounding green spaces, and a hopscotch game that incorporates an interactive, play element to the design. In addition, an art installation featuring a Maplewood sign that graphically depicts landmarks in Maplewood was created by award-winning painter and mixed media artist Genevieve Esson, of Maplewood. Esson’s art installation celebrates the identity of the City of Maplewood and expresses a deep understanding and commitment to equitable development, the impact and possibility of play and the ability for creative interventions to produce long-term impact in neighborhoods.

“Over the last several years, CMT and AARP in St. Louis have hosted a series of Pop-up Metro Markets to help area residents experience what it would be like if they could meet friends for coffee, grab groceries or take time out to relax, unwind or play in the vacant spaces currently surrounding MetroLink Stations,” said Kimberly Cella, Executive Director of Citizens for Modern Transit. “The transformed Maplewood station brings these ideas to life as a permanent installment, while creating a more inclusive and engaging transit stop. We are very excited to open these improvements to the local community.”

The design for the overall “Transit Stop Transformation Project” was led by BlackArc Design with input from residents. The project serves as an extension to Citizens for Modern Transit and AARP in St. Louis’ ongoing efforts to raise awareness about “placemaking” around transit. This is a concept that transforms places people simply pass through in route to their next destination – like MetroLink and MetroBus stations – into active, engaging corridors that connect individuals and neighborhoods by offering access to products, services and green spaces.

“AARP takes pride in helping communities reach their full livable potential,” said Sheila Holm, AARP Missouri, Associate State Director of Outreach for St. Louis. “The Maplewood transformation project is an extension of our work in the St. Louis area. Working with community partners like CMT, KABOOM! and others involved with this project help us to continue to create communities for all-ages that allow people to live, play, grow and age-in-place.”

Laura Miller, Community Development Director for the City of Maplewood added, “This once unassuming corner in downtown Maplewood is no longer just a portal for transit riders passing through. It’s now a vibrant and engaging space that hopefully will encourage transit riders to explore our community and the wonderful things it has to offer.”