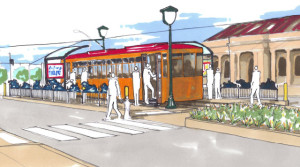 The Loop Trolley Company (LTC) today gathered key partners and stakeholders to celebrate major milestones recently reached in the project connecting St. Louis City and St. Louis County via an electrically powered, fixed-route trolley. The event also provided an opportunity to communicate important safety information. Attendees on hand for the event, which was held at the recently completed Loop Trolley Headquarters (5875 Delmar Blvd), toured the new facility where the trolley cars will be stored and maintained and got a close-up look at the first of the meticulously restored vintage trolley cars that is undergoing final testing in preparation for its debut on the newly constructed trolley route.

“We are thrilled to have the first restored trolley cars here in St. Louis so we can see first-hand the wonderful workmanship that has been completed,” stated Joe Edwards, chairman of the Loop Trolley Transportation Development District (LTTDD). “With the second of the refurbished Portland trolleys due here in the next few weeks, there’s no question we’ve made great progress over the past several months.”

As excitement builds for the testing to move out of the headquarters and onto the tracks where the public can get their first glimpse of the newly refurbished cars in action, representatives of The LTC and the LTTDD used the event as an opportunity to raise awareness about how the cars will operate and encourage people to visit the looptrolley.com website where they will find comprehensive safety information on the expanded safety tab.

To avoid coming into contact with the trolleys or otherwise putting themselves at risk, people should be aware of the following rules:

What will the testing entail?

Once vehicle testing gets underway on the tracks, it will be ongoing for several months before the trolleys begin carrying passengers, and it will involve both testing and training with not only Loop Trolley staff, but also in conjunction with first responders. As much as possible, testing will initially be conducted during off peak hours in order to have the least impact on existing traffic along the trolley route. In general terms, the testing will entail the following:

The Loop Trolley will run a total of 2.2 miles through the Delmar Loop, along Delmar Blvd. and continue on DeBaliviere Ave., connecting people and neighborhoods, the past and the present. From restaurants and shopping to entertainment, recreation and the arts, riders will be able to take in the multitude of attractions to experience along the route as they enjoy both the country’s “#1 City Park” and “One of the 10 Great Streets in America.”

To learn more about The Loop Trolley and sign up for future updates regarding testing dates, additional milestones reached and future grand opening plans, visit LoopTrolley.com.