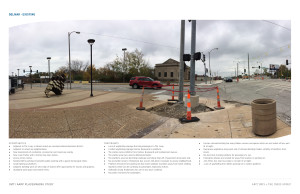 Only a few days into 2017, community partners have stepped up to activate areas around MetroLink stations highlighted by CMT and AARP in St. Louis during their Placemaking work last fall. The lights are now on at the Wabash Station, a key recommendation for activating the space around the Delmar Station and surrounding area.

CMT and AARP in St. Louis teamed up to host a series of walk audits at key MetroLink Stations – North Hanley, Forest Park and Delmar MetroLink Stations – to consider placemaking around transit.   The goal was to look at the impact of activating these spaces for current and future riders and the implications those changes would have on livability around St. Louis transit stations, including perceptions of safety and security.

“As a part of our research, we had the opportunity to look for ways to transform our transit stations into active, engaging corridors that connect individuals and neighborhoods by offering access to products, services and green spaces. Kudos to our community partners for taking some quick first steps based on our report to get the ball rolling.  Something as simple as turning on the lights goes a long way to building community support to further activate these station areas and create places,” said Kimberly Cella, executive director of CMT.

Ideas gathered ranged from something as simple as turning on the lights at the historic Wabash Station, to bringing Forest Park to the Forest Park Station including art and wayfinding that tells riders they are ‘at the park,’ to broad, mixed-use development goals for the future around all three stations. The lights are now on at the Wabash Station as well as other exterior lighting around the building shedding light on areas around the Delmar Station which were pointed out during the audit process as lending to the negative perceptions of safety. Vegetation facing Des Peres at the station has been thinned as well to create better sight lines.  More action items are in the works for the Delmar Station area, and community partners will be meeting in January at the Forest Park Station to discuss better connections to the Park.  In addition, a CMT &  AARP Metro Market is planned for May at the Forest Park Station to create a ‘pop up’ visual of some of the possibilities suggested during the research.

“We are looking to impact the ‘livability’ quotient around these stations through our work.  We know if we can demonstrate support and action on the short term items, we will have more opportunity for successes on some of the long term items/policy changes,” said Sheila Holm, Community Director for AARP in St. Louis.

One result of the research was a ‘to-do’ list for community members, stakeholders, private businesses and others to help build the connection to transit in St. Louis neighborhoods. There were three categories of outcomes identified: a) broad policy changes with regards to the St. Louis transit system; b) short term action items; and c) long term action items.   CMT and AARP’s goal is to ensure any proposed ideas put into action incorporate a community-wide effort and demonstrates how other local institutions, governments can contribute to the efforts.   Such efforts will help to enhance the vitality and security of the system while creating ownership from the surrounding communities, neighborhoods, and stakeholders of the St. Louis transit system.  Many of the recommendations are applicable to any station along the current alignment and any future expansion.

·         Host pop up programming at stations to provide opportunity to visualize the possibilities around the station i.e. CMT Metro Market, food trucks, entertainment from The Loop

·         Development/Redevelopment of areas around the stations

·         Installation of public restrooms along the alignment.

·         Location of police substation on alignment

·         Increase in number of police officers assigned to the system.