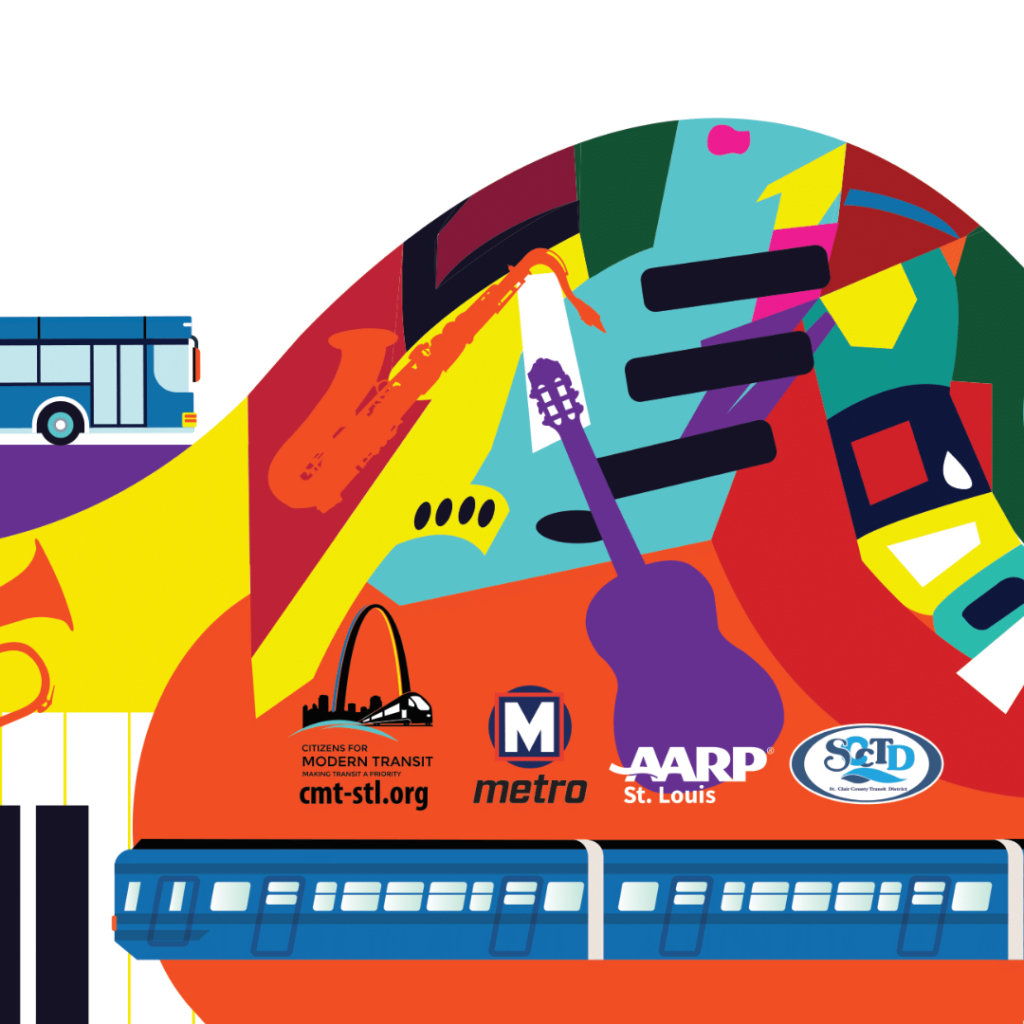 After getting input from transit riders, area residents, elected officials and stakeholders through a series of virtual Design Workshops, surveys and community events, the St. Clair County Transit District (SCCTD)  in partnership with Citizens for Modern Transit (CMT), AARP in St. Louis and Metro Transit will unveil the final “Transit Stop Transformation Project” at the Emerson Park Transit Center in East St. Louis on August 21 with a community event. The project transforms the concrete area between the bus bays and MetroLink entrance into an interactive, playful, engaging space that gives a nod to the history of music in East St. Louis and makes it part of the fabric of the community. In addition, a mural on the pedestrian overpass depicts the historic importance of music in East St. Louis.

The community event set for 9 a.m. at the station, 929 N. 15th Street, will feature formal remarks, the ability to explore the new space, local music, food, fun and more.

The finalized design – developed by the CBB/PGAV team – boasts a vibrant-colored jazz theme, featuring spaces to gather, greenery, shaded seating, canopies and more (see rendering). The team, along with Added Dimension, LLC, worked with East St. Louis High School students on design concepts for a mural for the site.

“This project got underway in January and has been a very engaging process ever since,” commented Herb Simmons, Chair of the St. Clair County Transit District. “We were thrilled with the input we received from the community and are excited to open this project to both riders and residents. This transformation project is going to do just that – transforms this space into a colorful, engaging corridor.”

The “Transit Stop Transformation Project” serves as an extension to Citizens for Modern Transit and AARP in St. Louis’ ongoing efforts to raise awareness about “placemaking” around transit. This is a concept that transforms places people simply pass through in route to their next destination – like MetroLink and MetroBus Transit Centers – into active, engaging corridors that connect individuals and neighborhoods by offering access to products, services, activities and green space.

The “Transit Stop Transformation Project” at the Emerson Park Transit Center is the second project of its kind in the St. Louis metropolitan area. Last summer, a MetroBus Stop in Maplewood, Mo., was transformed and now boasts enhanced bus shelters, a public art installation, a hopscotch game, vibrant colors, improved lighting and sightlines, and better access to surrounding green spaces.

“Permanent placemaking projects like the one underway in East St. Louis can serve as a transformational tool to reconnect a community, promote social equality, increase accessibility, position an area for growth, activate and beautify the public space, and enhance neighborhood safety,” added Kimberly Cella, executive director of Citizens for Modern Transit.

The Transit Placemaking Program is an opportunity for communities, corporations and non-profits to partner with Citizens for Modern Transit, Metro Transit and AARP in St. Louis to transform transit stops in their neighborhoods. Sites are selected based on local government/municipal support, corporate or non-profit partners, and community engagement. Citizens for Modern Transit has a Pilot Funds Program to assist with such projects. To learn more, call 314.231.7272, or email kcella@cmt-stl.org.