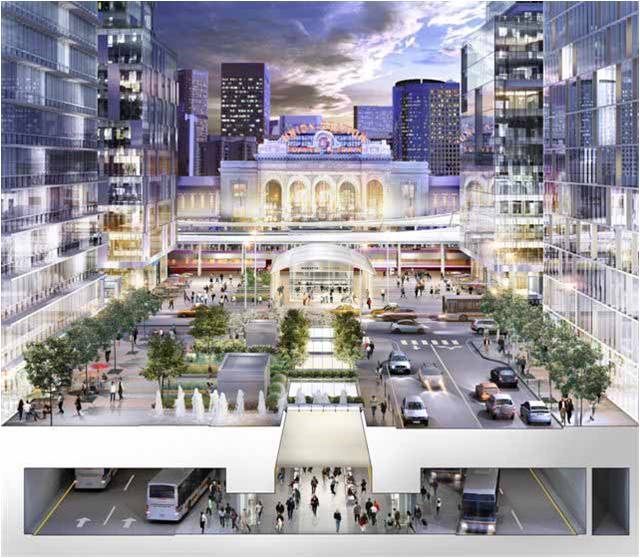 CMT’s keynote speaker, Laura Aldrete, spoke about the impacts of Denver’s transit program on the local economy and development. Aldrete oversses the Denver office of Parsons Brinckerhoff’s PlaceMaking Group. Prior to her position at Parsons Brinckerhoff, she served as the assistant director of the Denver Urban Renewal Authority, working to realize community revitilazation in blighted communities.

Aldrete highlighted Denver’s FasTracks program, the success of a  one cent sales tax referendum for transit, which has allowed the transit agency, the Denver RTD, to begin building places or Transit Oriented Communities along the future lines on the map. While not all the lines have been funded (the Denver program is $2 billion over budget), there is still significant demand in the communities with funded and non-funded lines to move the planning process forward.

Aldrete stressed that the key to these developments is the people.  When looking at the future lines, the RTD initiated a Transit Oriented Development (TOD) Pilot Program based on some of the guiding TOD principles:

•Greater density than community average
•Quality pedestrian environment
•Each node is unique
•A mix of uses & prices
•Community vision
The RTD policy reflected the federal emphasis on livable communities; broadened the definition of success from ridership and revenue to ridership, revenue, and fostering livable communities; and included a mixed-income housing policy.
One of the most significant actions that arose from this new policy was the need for the RTD to engage in joint development with the private sector.  Aldrete said that even though the RTD did not have money, they had access to land in many instances directly surrounding the stations for parking.  By utilizing  strategic use of parking replacement, new land valuation strategies, partnerships, and grant funding, the RTD has been able to use the dedicated ‘parking’ areas to design more livable, walkable areas around the stations.
Under the Pilot Program, the following criteria needs to be met in order for RTD to work on a TOD project:
•The project must fall within an existing or funded rail corridor
•Ability for Transit Authority to help “nudge” development
•TOD plan in place
•Commitment by local jurisdiction
•Commitment by developer/property owner
•Market potential
Aldrete highlighted three developments that have met these criteria and plans are moving forward –  the Alameda Station Village; Olde Town Arvada and the Denver Union Station.  According to Aldrete, the RTD was able to leverage  leverage $500 million in public funding to generate $520 million in private development at the Union Station site now under construction.
Click here for more information on Denver FasTrack’s Story on Place -BAsed Economics