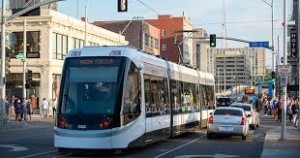 Running from the River Market on the north end to Union Station and Crown Center on the south, the Kansas City (KC) Streetcar connects all the downtown neighborhoods with 16 platform stops and 2 miles of track.  The KC Streetcar opened for service on May 6, 2016 to much fanfare. Five months after streetcar operations began, the KC Streetcar logged in its 1,000,000th ride, and ridership topped 2 million in 2017.

A recent editorial by the Pittsburgh Post-Gazette Editorial Board stated that a transit system’s appearance, performance and accessibility are barometers of a community’s cordiality and sophistication, factors that big employers take into account in deciding to invest in one city or another.   Looks like the KC Streetcar has put out the welcome mat for Kansas City and people are buying in.