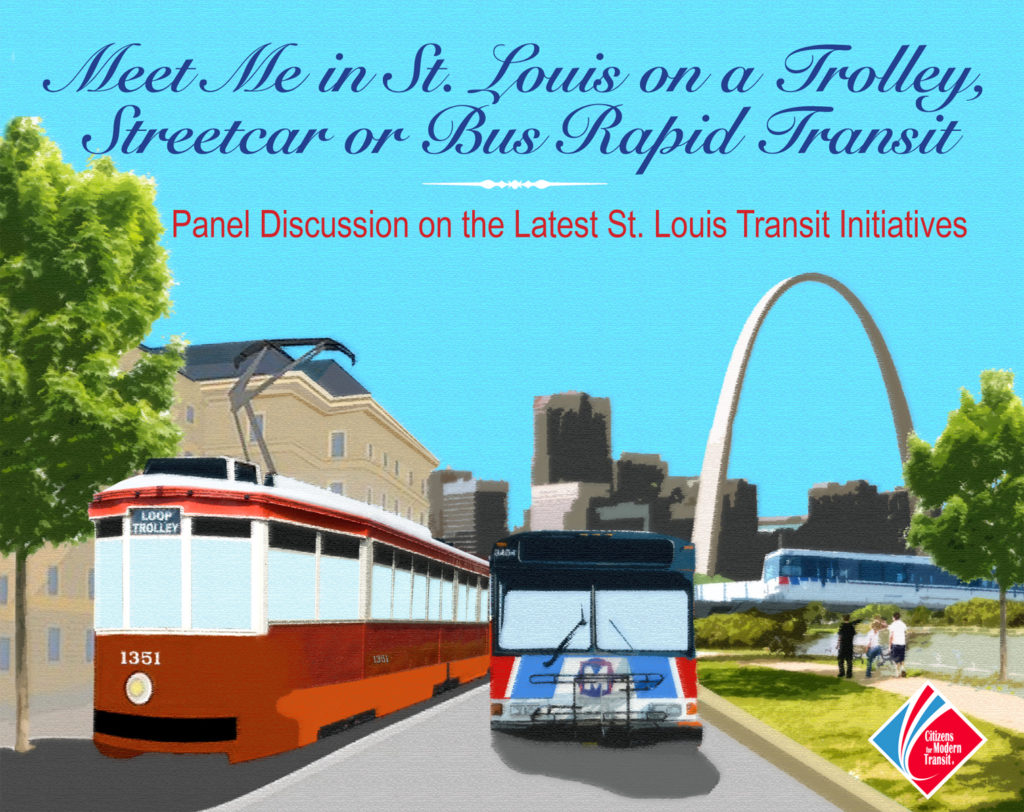 Join Citizens for Modern Transit (CMT) as we host an additional month of events to promote St. Louis’ transit system and its benefits to the region.  CMT’s promotions supported by the St. Clair County Transit District will include a special Ten Toe Walk through historic Belleville on June 4, a panel discussion focusing on new transit initiatives in the region on June 6, an Urban Land Institute report to the community on a possible MetroLink Station at CORTEX sponsored  by CMT on June 13, numerous other walks with the Ten Toe and Metro and collaborations with local media to promote transit to the general public including ‘Tony Transit’ with 105.7 The Point in St. Louis.

The events in June provide CMT a great opportunity to talk about all the benefits of transit for the region.  The activities not only promote the benefits of the ride from point A to point B – which are significant, but also all the benefits that occur outside the train window as a part of the ‘ride’ including increased economic development opportunities, increased independence/accessibility for St. Louis’ older adults, environmental benefits including improved air quality, and improved overall healthy of transit riders. It really does pay to ride transit and for a region, it pays to HAVE transit!

Public transit is not just a ride for someone else. While some St. Louisans utilize transit (thousands to be exact on a daily basis with the numbers increasing each month), all of St. Louis need the public transit infrastructure the region has in place.  According to the American Public Transit Association, every dollar invested in public transit has a four dollar return for this region. St. Louis needs that!  Since its opening in 1993, there has been more than $16 billion in development tracked within a half mile of the MetroLink system.

According to the U.S. Center for Disease Control, Americans need to exercise at a minimum of twenty minutes each day, and with Missouri’s obesity levels topping 30 percent, residents need opportunities to get healthy. Public transit users get that exercise at one or both ends of their trips. St. Louis needs that!  In addition, mixed use neighborhoods with transit stops within walking distance make it even a bigger incentive to walk or use transit (Healthy Eating Active Living Convergence Partnership).  In addition, this ‘active’ living helps to reduce the risk of chronic disease as St. Louisans age including diabetes, heart disease and more.

It really does pay to ride transit from the economic development opportunities to the health benefits to the environmental benefits to the personal fiscal rewards.  According to the American Public Transit Association, individuals who choose transit over owning a car can save more than $8,000 a year.   St. Louisans need that! Whether for work or play, CMT hopes you will Make your Move on Metro this May and check out all the rewards of riding transit!

TEN TOE WALKS
There is a special Ten Toe Walk on June 4 to historic Belleville.   Join special guest walk leaders Bob Brunkow and Larry Betz with the Belleville Historical Society for a walk of historic Belleville neighborhoods. For those who have joined us in the past, this walk will include new sites. The district is one of the oldest residential areas in Belleville. Along its streets lived some of the most prominent people in Belleville, including a key political advisor of Abraham Lincoln, and many Civil War veterans. Adjacent to the homes of the merchant princes and politicians are the humble German American brick cottages of coalminers, blacksmiths, and brick makers. The homes built from the 1850s to the 1930s reflect many different architectural styles.

The walk begins at the Belleville Metrolink Station and proceeds briskly to the corner of Mascoutah Avenue and Main Street, where the narrative begins. We tour Mascoutah, Abend, Garfield, Fulton, and Charles Streets, a distance of about eleven blocks, but the transit time to and from the Metrolink station makes this a fairly lengthy trip.

Please mark your calendar on Thursday, June 6 for CMT’s Meet Me in St. Louis on a Trolley, Streetcar or Bus Rapid Transit? Panel Discussion on the latest transit initiatives in St. Louis. Join us for networking from 5:00 – 6:00 pm, and a formal presentation at 6:00 pm.  This panel discussion will offer St. Louisans the opportunity to hear about the new transportation projects underway or being considered for the region.  Speakers will discuss the integration, impact, and benefits of the different projects.

Panel participants will include:

REPORT TO THE COMMUNITY ON CORTEX STATION
CMT in partnership with Metro invites you to attend an upcoming Urban Land Institute (ULI) Cortex TAP report on discussions about possible locations for a MetroLink station, parking garage, and incentives for spurring development around the Cortex site.

This special presentation to the community will be held at Cortex, 4320 Forest Park Ave.

This month Tony Transit will be riding Metro during ‘happy hour’ or peak rush hour giving out gift cards and other prizes to stress that taking transit  really does put money back in your pockets!   Find Tony Transit on the train and walk away from an even happier commute!

Here is how the promotion will work:

The benefits don’t stop here.  Remember June is a gret month to give transit a try – it really does pay to ride!  Look for Tony Transit for an even better commute!