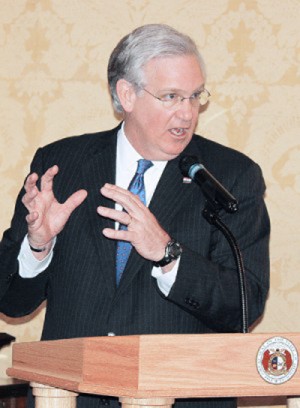 Missouri Governor Jay Nixon announced that, if re-elected, he is willing to lead a serious dicussion in the future on transportation needs, including possibly using tolls to finance road and bridge projects. The use of tolls has been discussed as a way to finance a new Missour River bridge at Washington, which has been included in the state’s five year transportation plan. Tolls have also been suggested as a way to finance reconstruction of Interstate 70 through Missouri, but currently state law does not allow the establishment of toll roads or bridges.

Nixon believes it is vital to address the transportation funding issue, especially since the state is coming to the end of the bonding process used to finance priority projects over the past couple years. Another major concern is that transportation funding is based solely on revenue from fuel taxes, which are dropping because of cars with better fuel economy and the growing number of electric cars.

If re-elected, Nixon’s sense is that he will lead a discussion on the issue, have comprehensive communication, and develop a checklist of things to get done.