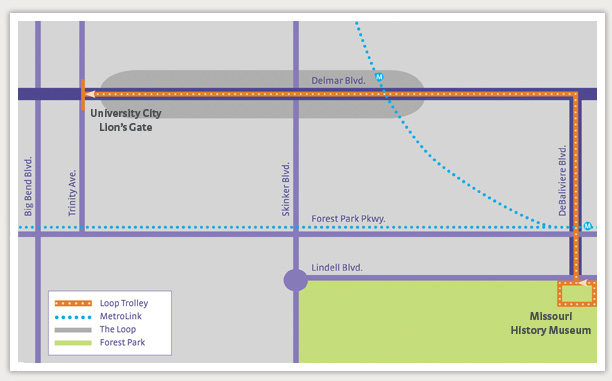 The final approval of the $25 million federal grant to fund The Loop Trolley has highlighted the discussion of what sort of development might truly arise post construction.  A large goal of the two-mile streetcar track, which will stretch from University City Hall to Forest Park, is to revitalize the stretch of property along Delmar, east of the MetroLink tracks.

“It’s been proven time and again. The fixed-track nature the project is a great difference-maker,” Joe Edwards said. “If someone’s thinking of investing in a new building, it gives them that extra comfort. It’s just enough to tip the scale.”

Those who own property where the line is designated, have voiced optimism that the Trolley line will “boost the neighborhood.”  A project is already underway along that strip of Delmar: the $11.4 million renovation of The Gotham apartment building on Hamilton Ave, and a new three-story building on Delmar.  Additionally, “Great Rivers Greenway plans to build a bike and walking path along DeBaliviere as part of its St. Vincent Greenway project. And a group called the St. Louis Cloud Coalition is trying to raise money to lay a high-speed fiber-optic line along with the trolley, to offer one-gigabyte internet speeds to buildings along the route.  It’s the kind of thing – coupled with the good transit connections and the Loop’s vibrant street life – that could attract a wide range of new companies to the street.”

In order to encourage fresh development around the new transit line, it is anticipated that the city would contribute zoning changes, tax breaks and other incentives based on the project type.

Currently, there are sixteen streetcar lines in operation in the United States and several others are in different stages of development, due mostly in part to federal subsidies.