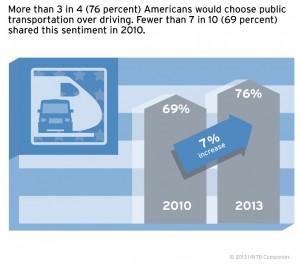 HNTB Corporation’s recent survey shows that 76% of Americans “are open” to taking public transportation for a trip instead of driving, which is 7% more than responded this way in 2010. The survey, run the week of September 5 – 12 of 2013, collected responses from a random nationwide sample of 1,127 Americans.

When asked about specific public transportation options, people’s responses relate to some of the projects being considered for this region:

While these findings don’t match the current results of CMT’s survey about local transit priorities, they do provide an interesting comparison.