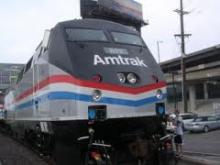 This past Friday, higher speed rail service of 110 mph began on a segment between St. Louis and Chicago.  Illinois Governor Pat Quinn, Illinois Transportation Secretary Ann L. Schneider and Amtrak officials announced that 110 mph rail service has started on a 15-mile segment along the Chicago-St. Louis corridor just in time for this past weekend’s heavy travel due to the Thanksgiving holiday.  This marks a huge step towards higher speed rail infrastructure for Illinois and Missouri.  The service will begin between Dwight and Pontiac, on the following trains:  northbound trains 300, 302, 304, and southbound Trains 301, 305, and 307.  Other Amtrak trains on the Chicago-St. Louis corridor will continue to operate at 79 mph top speeds, including the Texas Eagle (trains 21/321/421 and 22/322/422).  In addition, select Amtrak Lincoln Service trains will have also free AmtrakConnect(TM) Wi-Fi service throughout the coaches, business class seating and in the cafes.

Secretary Schneider said, “We are extremely proud to introduce 110 mile per hour rail service to Illinois Amtrak passengers for the very first time, and look forward to continual progress in bringing enhanced services to riders along the corridor.”

“Regular operations at 110 mph for six daily Amtrak Lincoln Service trains are a major milestone in the development of our Chicago Hub network,” said Amtrak President & CEO Joe Boardman.  “Combined with our high-speed trains in Michigan, this means Amtrak now has a total of 14 daily trains to and from Chicago that operate at 110 mph.”  The 15-mile segment showcases major infrastructure improvements, state-of-the-art signaling, and significant technological and safety advancements.  The 110 mph service is projected to be in place along nearly 75 percent of the Chicago-St. Louis corridor by 2015, reducing travel time by more than an hour.

When completed, trains traveling from Chicago to St. Louis will reach top speeds matching those of trains now traveling between Chicago and Detroit, the fastest passenger trains in North America outside of the East Coast.