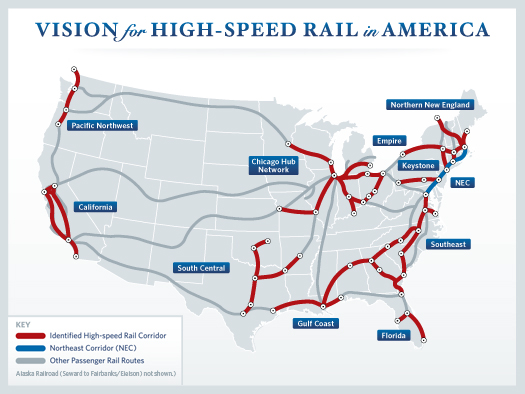 High-speed rail (HSR) is becoming more critical to America’s economic future as highway congestion continues, the U.S. population grows, and as the daily battle to keep the air clean goes on. Thirty-two states are currently moving forward with HSR projects, and the Obama administration has provided more than $10 billion for investment in HSR and passenger rail projects. Nearly 85% of those investments are concentrated in the densely populated mega-regions below, which are offering more efficient modes of transportation using HSR. Rural and small urban communities will also benefit from increased transfer points and services.

Here is a brief overview of some of the more than 40 projects totaling $2.9 billion that are under construction or set to break ground this year.

Workers are laying 96 miles of track between Chicago and St. Louis in order to reduce passenger travel time by one hour by upgrading speeds to 110 mph on portions of the corridor. This should be completed by 2014. This past February, 110mph rail service began between Chicago and Kalamazoo, MI, marking the first expansion of regional HSR outside the Northeast corridor. An estimated 5,000 jobs will be created through this effort.

Many improvement projects are currently under construction on routes that serve nearly 50 million people in regions around Boston, New York, Philadelphia, and Washington DC. Speeds will be increased, safety will be improved, and services will be expanded. Private investors have begun gravitating towards the Brunswick Station, with the new service expected to generate more than $7 billion in development, 10,000 jobs, and $75 million in annual state revenue. The Federal Railroad Administration is also developing a comprehensive, corridor-wide planning and environmental initiative to replace aging bridges, expand constrained stations, and upgrade track and power systems in order to reduce trip times, improve reliability and safety, and allow for 160 mph service in certain segments.

With more than $800 million in federal funding, Portland, OR and Seattle, WA are transforming train stations and improving the region’s rail capacity and service reliability. Ridership has tripled since 1995, and demand for passenger rail service is surging. The goal is to provide hourly rail service between Portland and Seattle, shortening the trip by one hour. This will make rail competitive with air travel, as well a decrease automobile congestion and carbon emissions.

Virginia and North Carolina have been expanding service, and this year North Carolina will begin a $290 million corridor upgrade to reduce trip times between Charlotte and Raleigh, increasing daily round trips and improving on-time performance.

The California High-Speed Rail Authority projects that HSR-related investment and economic growth will result in a total of 600,000 full-time construction jobs and 450,000 permanent new jobs over the next 25 years. Their goals include connect major cities, linking suburban commuting sheds with central cities, and providing service among the largest central cities to reduce airport congestion.