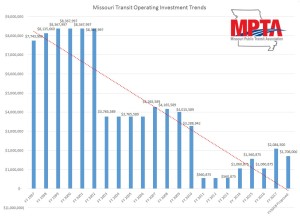 After approximately an hour and 45 minutes of debate on the floor of the Senate today, HCR 47 was passed without amendment by a vote of 33-0. This bill sponsored by Rep. Kevin Corlew calls for the formation of a task force to look at Missouri’s Transportation System and funding.  The resolution now goes into effect, no Governor’s signature is required on a resolution. The special task force will be appointed and hold its first meeting by July 10, 2017.

For more information on the bill: http://www.house.mo.gov/BillContent.aspx?bill=HCR47&year=2017&code=R&style=new

The Missouri Senate Appropriations Committee upheld the Governor’s and House Committee’s recommendations to cut $500,000 in general revenue for transit operating assistance for next year’s budget.   With that cut, funding will be approximately $1.7 million in State Transportation Fund revenues.  The total budgeted for transit assistance in 2016 was $2.08 million including the Governor’s withhold of $121,500 in General Revenue in the fourth quarter.   This funding is distributed based on a formula among 32 transit providers in MO.