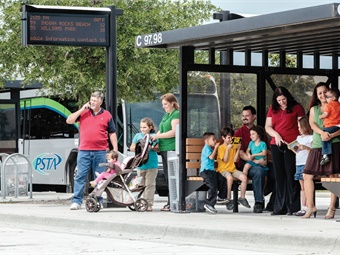 Researchers from the Mineta Transportation Institute (MTI) conducted their ninth annual public opinion survey around the question: “What Do Americans Think about Federal Tax Options to Support Transportation?”  Results indicate that a majority of Americans would support higher taxes for transportation under the right circumstances. For example, 72% of respondents supported a gas tax increase of 10 cents per gallon to improve road maintenance, but support dropped to 34% if the revenues were to be used more generally for “transportation.”

This is the ninth annual survey of its kind, with the same question, year after year.  The current studies results show a continued trend of rising support for increase in the gas tax rate.  Since 2010, support has grown by 10 to 15 percent for each gas tax option.

“We face growing needs across our transportation system, but funding hasn’t kept pace,” says Dr. Asha Weinstein Agrawal, one of the study authors and Director of MTI’s National Transportation Finance Center. “To solve this dilemma, we must either lower our goals for system maintenance and improvements, or raise new revenues.”

Other Key 2018 findings include:

What are your thoughts about tax increases to fund transportation initiatives?  Let us know by sending us an email! For more information check out the original article here.