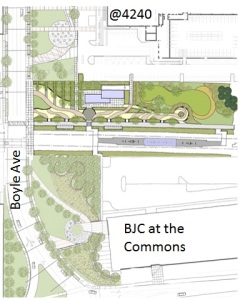 Metro is set to break ground on the new Boyle Street Station, an infill station in the Cortex Innovation Community, this Thursday, June 8 at the site of the new station adjacent to the @4240 Building. This station will be the first addition to the MetroLink system in the St. Louis region since the opening of the  Cross County in 2006.

CMT led the feasibility study for this station in 2014 with the help of partners including Washington University, BJC Healthcare, Cortex and Great Rivers Greenway for the infill station, enhancements to CWE Station and a connecting bike trail. The study represented a true public-private partnership that raised the local match to pay for the study and to team with Metro to manage the project and move it forward.  In addition, the study laid the groundwork for the award of the $10.3 million TIGER grant to Metro to move the project forward.  Construction on this station is estimated to be completed in 2018.

“As a transit advocacy organization, we were thrilled to have the opportunity to work proactively and collaboratively with stakeholders in the region, Metro and others to complete the necessary feasibility study and move the process forward for the addition of the Boyle Street Station on the MetroLink alignment.  Congrats go to the stakeholders and Metro  for ensuring St. Louis sees more MetroLink in the very near future. This station is an opportunity for a true TOD in ST. Louis where residents can live, work and play on transit,” said Kim Cella, executive director of Citizens for Modern Transit.