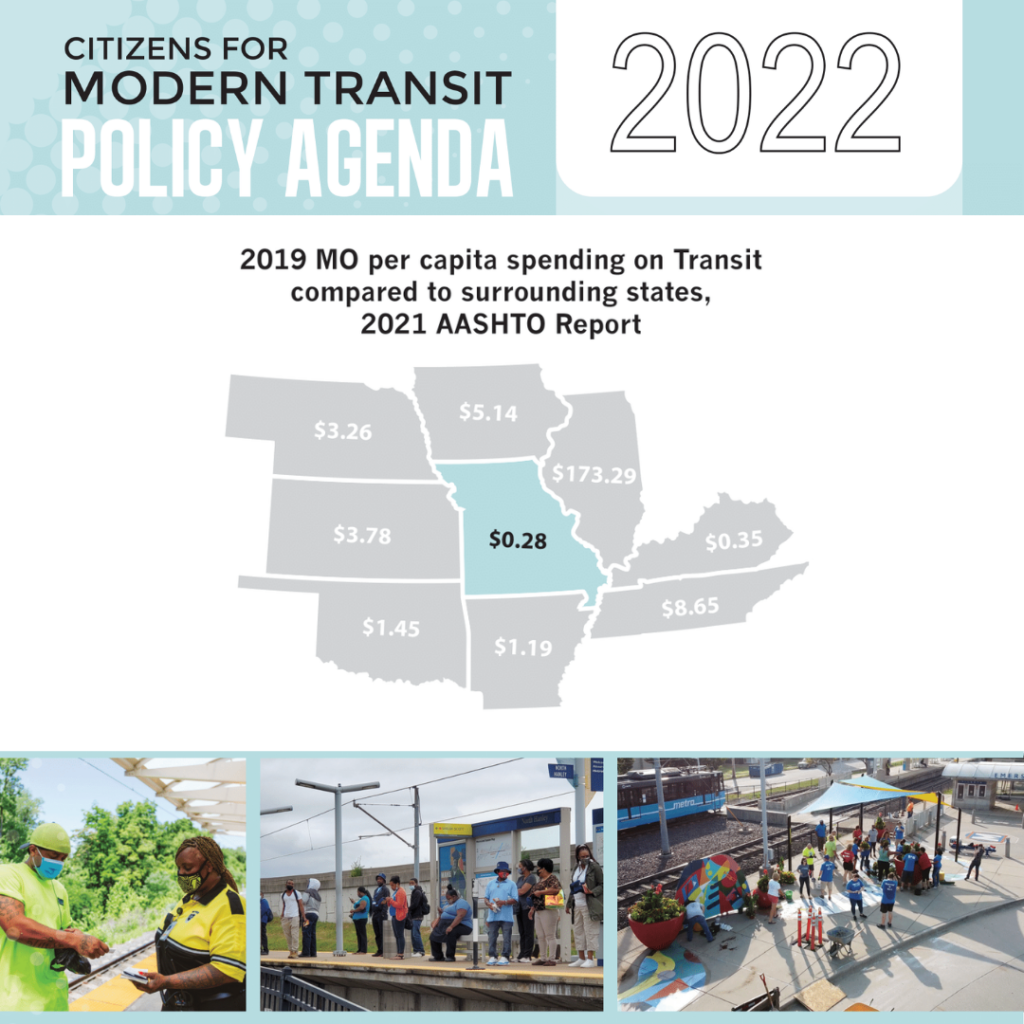 Transit funding and regional transit priorities top the list of CMT’s  2022 Policy Agenda. In addition, Missouri transit is delivering $3.6 billion in economic activity each year.  Transit is delivering in Missouri despite the distinct lack of funding. But, the impact could be bigger, better and more profound.   Any increase in investment by the State of Missouri could exponentially change the game in terms of economic return.

The federal COVID relief bills delivered a $600 million lifeline for Missouri transit providers. However, Missouri’s investment in transit is even more critical as the impact of the pandemic continues to take its toll on public transit providers across the state. State investment is key to ensure Missouri providers can bring as much federal funding back to the state through matching funds.

However, state funding for transit is even more critical as the impact of the pandemic continues to take its toll on public transit providers across the state. According to the 2019 Transit Impact Study, public transit delivers in Missouri. There is a total of 34 transit providers in the Missouri. They collectively spend $675 million each year on operations, capital improvements and labor compensation for the 4,500 individuals who are employed at an average salary of $64,200. In addition, public transit is delivering more than $3.6 billion in direct and indirect spending each year.

Support the Missouri Highway and Transportation Commission’s request of $8.4 million for Missouri transit. This request would include $6.7 million from General Revenue and $1.7 million from the State Transportation Fund. Currently, state transit funding assistance does not cover the impact of rising maintenance/operating costs of keeping the current systems in good repair. For SFY21, the total core budget was $1,710,875 in State Transportation funds for 34 providers. Funding from General Revenue was zeroed out in 2017.

Support a statewide funding plan for transit access for workforce development.  The adoption of such a plan would reflect the importance of public transit to expanding opportunities for job access and growth to all Missourians. Twenty-nine thousand jobs are directly or indirectly supported by public transit, yet thousands more are supported through transit access. A state investment in transit for workforce development would be a game-changer for Missouri employers especially in light of the impact of the pandemic on operator shortages.

Support a list of transit capital infrastructure projects for the ARPA funds.

Thank you in advance for all you do to make St. Louis a better place to be with Transit.