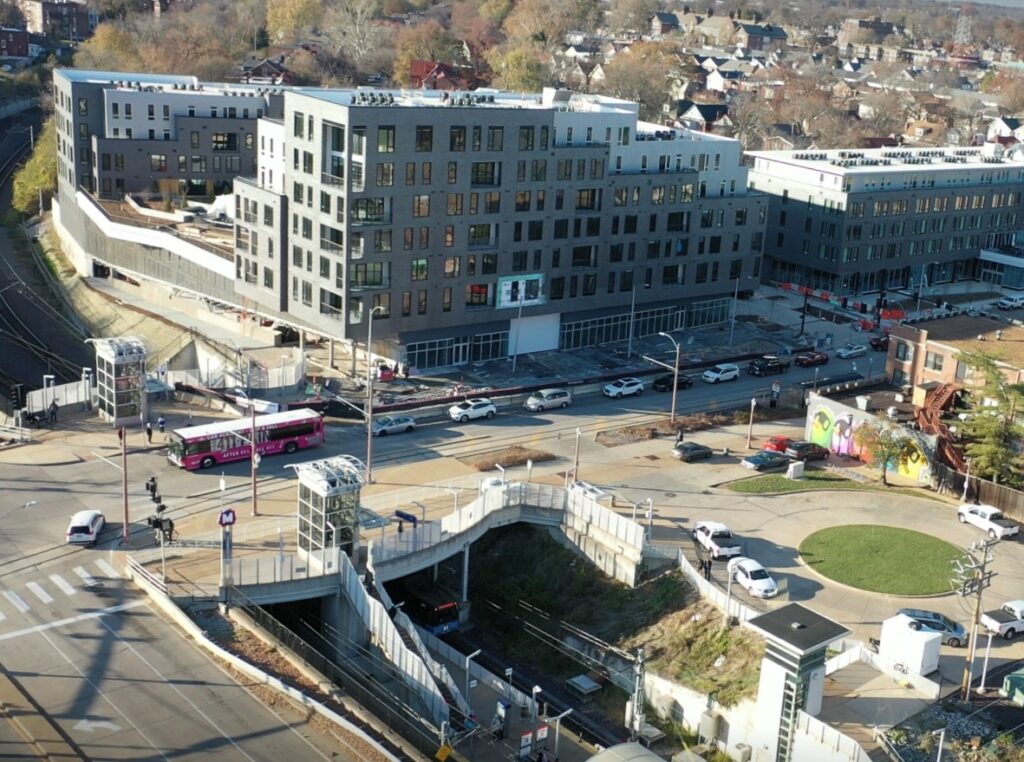 The St. Louis region is now home to a new transit-oriented development (TOD) community that raises the bar for TOD projects not only in the bi-state area, but is possibly a model for other developments around the country as well. The new $90 million multi-family, mixed-use development is adjacent to the existing Forest Park-DeBaliviere MetroLink Station in the historic Skinker-DeBaliviere Neighborhood in the City of St. Louis, and residents are flocking to it. Leasing at the Expo at Forest Park during the first nine weeks has surpassed expectations, with 72 leases signed, and only 36 (50%) of those residents have a car. 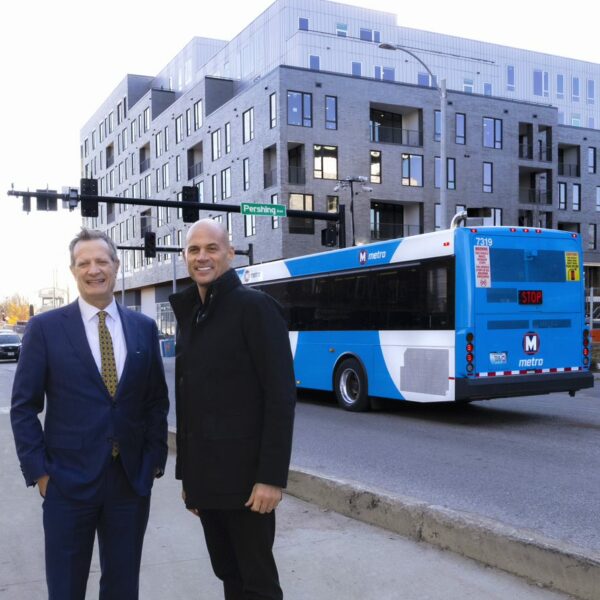 Tegethoff said his company knew the site was special from the outset. While the broader area was densely populated, the intersection had been underdeveloped. With multiple modes of transportation coming together — vehicles, light rail, buses, pedestrians, cyclists, and greenway users, this development is re-establishing the intersection as a gateway to the neighborhood. Tegethoff said this is the first TOD of this scale in St. Louis. In his opinion, there was no better spot to create the development given the MetroLink ridership and activity at the Forest Park-DeBaliviere MetroLink Station with two to three stops in either direction connecting directly to Forest Park, as well as to world-class educational and medical institutions, the Cortex Innovation Hub and significant job opportunities.

Another key contributor to the success of the TOD project is the progress Bi-State Development has made to create a safer, more secure public transit system.

Bi-State Development operates the Metro Transit system that serves eastern Missouri and southwestern Illinois. Roach said safety and security on an everyday basis is about presence on the street.

Designed to enhance connectivity to the St. Louis region’s Metro Transit system and the St. Vincent Greenway, Expo at Forest Park includes two multi-family buildings with 287 apartments, parking, amenities and 30,000 square feet of retail space, all accessed through a front door that is also the front door to the public transit system. A grocery store is moving into the north building on the ground level, which also includes space for a taproom serving local beers. Residents began moving into the north building in August 2022. The seven-story south building will open in the next few weeks. It includes an amenity deck featuring extensive vegetation, bocce ball, a pool, fitness center, lounges and a pet wash. Many of the top-floor units are two stories and include private patios and views of Forest Park, a 1,300-acre urban park where five major cultural institutions are located including a zoo, art museum, history museum, Muny opera, and science center. The park is a prime area for walking, running and cycling so some of the residential units at Expo at Forest Park have bike mounts designed into the floor plans.

More than half of the new residents do not own cars so the close proximity to public transit is an important option. Amenities such as a grocery store; covered parking for residents, customers and transit riders; and transit security improvements also benefit anyone who is accessing the transit system via the Forest Park-DeBaliviere MetroLink Station.

Trivers Principal Joel Fuoss, AIA, LEED AP, was the key partner for architecture, planning, urban design and interiors for the development of the Expo at Forest Park and the firm played an important role in making sure it was seamlessly integrated into the existing neighborhood.

Trivers collaborated with associate architect HOK on the project, and Brinkmann Constructors is the general contractor for the Expo at Forest Park.