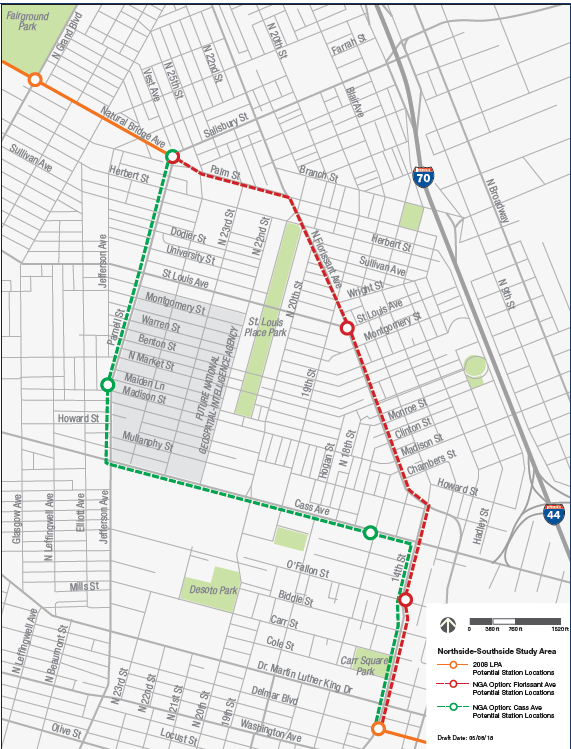 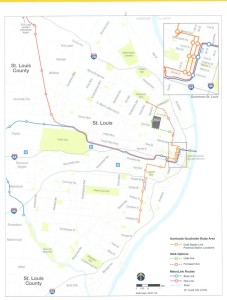 The Northside- Southside Study was an 18-month effort, led by the East-West Gateway Council of Governments, to study light rail investment in the corridor connecting Goodfellow and I-70 on the Northside of St.  Louis to Bayless and I-55 on the Southside.  The study built on the recommendations of a 2008 study.  Today, the East-West Gateway Board adopted a preferred first phase of the locally preferred alternative for the corridor.  The alternative would operate from  Grand Ave and Natural Bridge on the northside, along 9th and 10th Streets downtown, to Jefferson Ave/Chippewa Street on the southside.   This 8+ mile initial investment would cost approximately $667 million (in 2017 dollars) and would add 16  stations to the alignment.

According to the consulting team led by AECOM, this extension would serve 47,000 residents, provide access to 65,000 jobs and serve 9,000 daily transit riders.   There are also two alignment options (Cass or Florissant Ave.) through North St. Louis to serve NGA that will be studied in further in future project phases:  Cass Avenue is the preferred alignment going into the analysis.

The East-West Gateway Board’s decision today enables the City to advance the project to the environmental documentation stage, during which an Environmental Impact Statement would be prepared.  In addition, the next phase will also examine and consider new technologies as a part of the project deployment.  Currently in the transportation industry, technologies continue to development at a rapid pace. It is anticipated that the federal government would pay for half of the capital cost of the Northside Southside LRT through the New Starts Capital Investment Grant Program that is administered by the FTA.   The 1/2 cent economic development sales tax  passed in April 2017, with 60 percent dedicated to the Northside Southside project  and other local and regional sources would pay for the balance of the capital costs.

According to AECOM, MetroBus riders would be able to access this extension at almost every station along its route, and riders from the Red and Blue lines would be able to transfer at the stations along 9th and 10th or at the Civic Center Station.  It is estimated that this project could be operational by 2029  if the project stays on track with environmental review beginning in 2019.