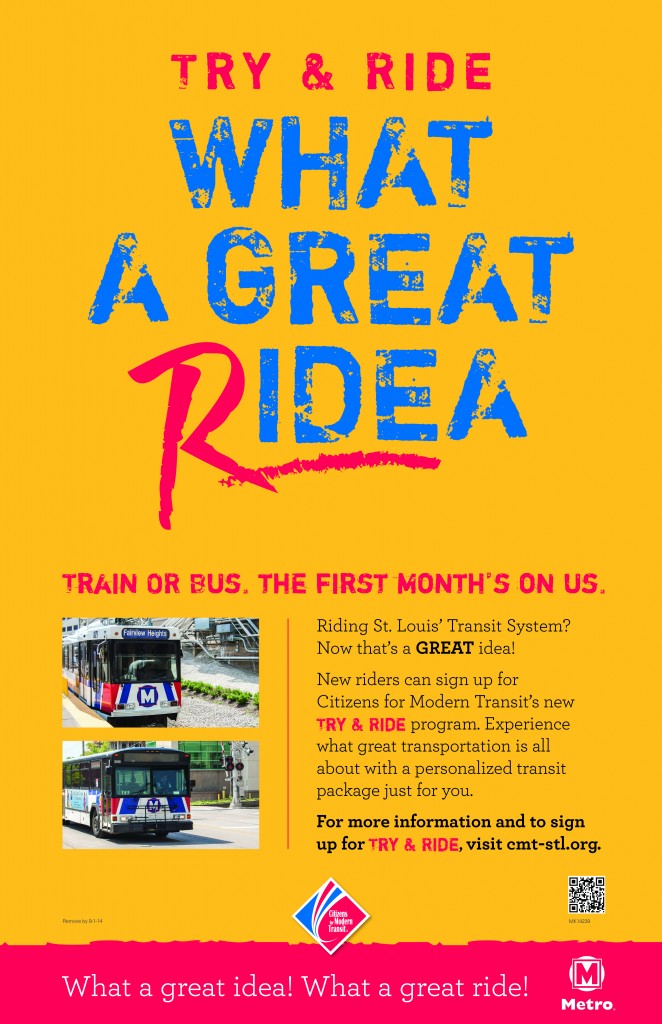 National Dump the Pump Day encourages people to ride public transportation (instead of driving) and save money.

What a great idea! Riding public transit is an economical way to save money, particularly when gas prices are high. The latest American Public Transit Association’s  Transit Savings Report shows that a two person household that downsizes to one car can save – on the average – more than $10,174 a year.

With that said, Citizens for Modern Transit is launching its new Try & Ride Program on June 16 in the St. Louis region.

This comprehensive transit program provides participants with answers to all the hurdles for using transit. It gives commuters the opportunity to familiarize themselves with the transit system, their personal route, the money saving benefits, and more.   CMT is confident that once St. Louisans try transit, they will recognize the benefits and make it part of their regular commute.

Try & Ride participants receive the following as part of their commitment to give the program a try:

Area media personalities, including Paul Cook with Y98 (Twitter @PaulCooked) and Todd Morgan with KHITS, will be participating in the Try & Ride program and chronicling their transit adventures on air and online.

The CMT Try & Ride Program is a complimentary program for the region’s commuters in Missouri and Illinois. There is no fee to participate. Participants are asked to commit to using transit for two months during their work commute  (this does not mean every day of the week for eight weeks – the commitment includes transit travel  three days per week). CMT will cover one month of tickets and the second month will be covered on their own (many commuters may even work for an employer who covers the cost of the transit pass or a portion of the cost).  Participants will also be asked to take a quick survey at the end of the first month and then again at the end of their two month transit commitment.