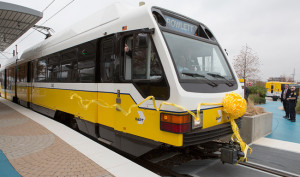 Dallas, Texas recently celebrated a few big public transportation milestones including the completion of their Dallas Area Rapid Transit (DART) system, a project 20 years in the making. With the recent opening of the three mile extension of the DART blue line, the DART system now stretches 93 miles across the area making it the largest electric light rail system in the nation. This latest extension connects the ‘education corridor’ with downtown Dallas providing service to numerous colleges and universities.

The DART system is not only connecting residents to education, jobs, and other opportunities, it’s also proving to be a main driver of growth in the region. The area has seen an impact of more than $7 billion dollars in investment along the rail line; this number comes from the new or planned development projects within a quarter mile of rail stations. Along with development, the DART is also bringing jobs to the area, about an additional 43,000, and revenue in state and local taxes, about $69 million thus far.

Another milestone being celebrated is the increase in service along the Trinity Railway Express (TRE) which runs from Fort Worth to Dallas Union Station. The increase is in response to customer requests for more service during peak hours. The TRE will now run every 30 minutes during peak morning and evening hours. They also plan to extend their Friday and Saturday evening hours and will open earlier on Saturday mornings to account for early shift workers.

Finally, Dallas’ Union Station celebrated its 100th anniversary recently with a name change. The station was renamed in honor of Rep. Eddie Bernice Johnson who has played an influential role in the development of public transit in the city. Union Station serves as a transportation hub for the area, linking Amtrak, TRE, bus, and DART service.