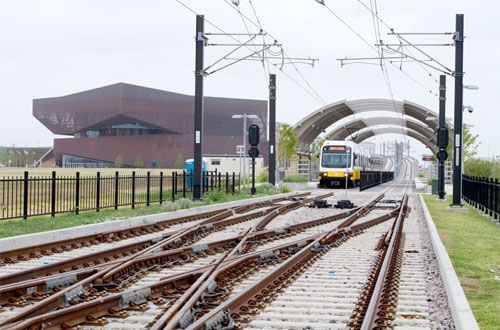 On Monday, July 30, the Dallas Area Rapid Transit (DART) opened the first 4.5 miles of the Orange line, which will eventually reach 14 miles, bringing access to employment and educational opportunities for thousands who commute in and out of Irving daily. The arrival of light rail culminates more than 12 years of land-use planning.

DART plans on opening the second phase to North Lake College and Belt Line Road on December 3. At Belt Line Station, buses will meet trains to take passengers to and from DFW International airport until the DFW station is opened in 2014.

The anticipated arrival of DART Rail has spurred construction of luxury apartment communities throughout the Las Colinas Urban Center. The DART stations are also becoming vibrant public spaces instead of just transit stops because of its growing collection of public art.

Three stations were also renamed to be location-specific in order to make it easier for riders to navigate DART. Also, a new park-ride lot opened in Plano, which is located near the headquarters of several major corporations, including Frito-Lay and JCPenney.

DART’s $3.4 billion light rail expansion has provided a much-needed stimulus during the economic downturn, producing more than 600 jobs at some 80 contractor companies in 14 different states.  Federal officials have cited DART’s Orange Line as one of the top “Recovery Act Projects Changing America”. This construction adds to the largest electric light rail system in North America, reaching nearly 90 miles at the completion of the expansion in 2014.