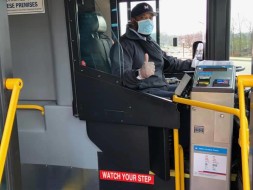 The St. Louis County Council voted 6-1 Tuesday to send the Bi-State Development Agency its fiscal year 2021 operating and capital budget. Each year, Bi-State goes through an appropriation process with both the City of St. Louis and St. Louis County.  The budget request was for $134 million ($133,992,195) and represents 80% of the funding needed from the County for the upcoming budget year.  The other $33.5 million ($33,498,049) or 20% will be funded by CARES Act reimbursements for operating expense.

The Cares Act is delivering a $248 million lifeline for Missouri Transit providers. Congress crossed the finish line on March 26 with the Coronavirus Aid, Relief, and Economic Security (CARES) Act which included $25 billion in transit funding for rural and urban areas across the country. Bi-State Development through its partnership with St. Clair County Transit District in Illinois received more than $142 million in support. The CARES Act funding was passed to offset the massive deficits due to dropping farebox recovery, increased expenses from new cleaning protocols and reductions in sales tax revenues due to the  pandemic.