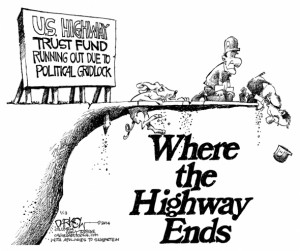 The American Public Transportation Association (APTA) suggests Congress increase transit system funding by $11.5 billion per year.  They want Congress to approve $100.4 billion in new public transportation spending.  This increase is proportional to the increase being proposed for all transportation projects.

Public transportation systems are currently funded through the surface transportation bill that will expire in September and the Highway Trust Fund that is projected to go bankrupt before August.

The Highway Trust Fund was established in the 1980s to collect 18.4 cents-per-gallon of gasoline to pay for highway and road projects across the country.  Transit was funded with about 20% of the money collected.

The trust fund is bankrupt due to improved fuel efficiency in cars and less people driving.  Currently, the gas tax brings in approximately $34 billion a year, but the current transportation bill includes more than $50 billion in infrastructure spending, hence the shortfall.

Therefore, without a new bill from Congress, transportation in this country is in trouble.  The Congressional Budget Office projects that it will take $100 billion in revenue to pay for a new six-year transportation bill that would adequately address the Nation’s infrastructure needs.  Both parties suggest that this money be raised by closing tax loopholes.

Please contact your legislators and tell them that you want transit funding to increase proportional to the increases being proposed for all transportation projects.