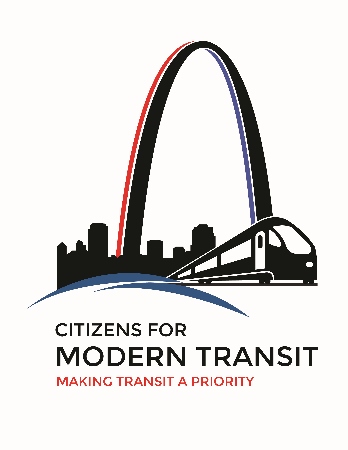 Transit is at a critical juncture in the St. Louis region. The recently released Ferguson Commission Report highlighted the need for transit expansion and funding as a signature priority project. St. Louis County is wrapping up community engagement for the selection of a corridor to take a MetroLink expansion study to the next level. The City of St. Louis will have a new station added to the current alignment in the next several years. Citizens for Modern Transit (CMT) is focusing its efforts now more than ever to ensure a coordinated transit plan for the region and a capital and operating funding package to make that vision a reality.

Now is the time to consider a special year-end gift to Citizens for Modern Transit (CMT) and see an even greater return on your investment in 2016! CMT recently received a new $750,000 federal grant to increase ridership on the system, including our award-winning  Try & Ride program. Your year-end gift will help to raise the required 20 percent match to make this grant work a reality.

When you support CMT, you not only support transit in the region, but you also help improve the quality of life in St. Louis, bring economic development and jobs to the region, improve the quality of air that you and your children breathe, and contribute to making transit a transportation option for all of us.  To give you a sense of your return on investment by joining CMT, we wanted to highlight some of the accomplishments CMT members have made possible in 2015:

A 2015 What’s Right with the Region! Award presented to CMT for its Try & Ride Program

•Celebration of 30 years of transit advocacy in St. Louis

•A $10.3 million TIGER grant to Metro for a NEW MetroLink Station at CORTEX and upgrades to the Central West End Station – the first addition to MetroLink in the region since 2006! Not possible without the CMT led Feasibility Study moving the project forward.

• The CMT Try & Ride Program, asking commuters who have never ridden transit to try the system for their work commutes, doubling the 2 year goal of 1500 within 18 months with no signs of stopping.

• Creation of the CMT Metro Market, pop up ‘markets’ at stations so residents can see the possibilities around transit; passage of zoning around the Rock Road Station for TOD; and an RFP for development around the Belleville MetroLink Station.

• CMT Speaker Series to inform policymakers and residents about how to best leverage the system, its Ten Toe Express program that has introduced more than 7,000 seniors to transit, the Guaranteed Ride Home program providing a quick ride home in the case of emergency for transit commuters, and more!

CMT’s work and your support matters because the more St. Louisans take advantage of transit, the more we can all enjoy the benefit transit provides the community.  Remember all gifts to CMT are tax deductible. Please consider a special year end gift today to see more transit in St. Louis tomorrow! All gifts of $250 or more will receive a model MetroLink car for your collection