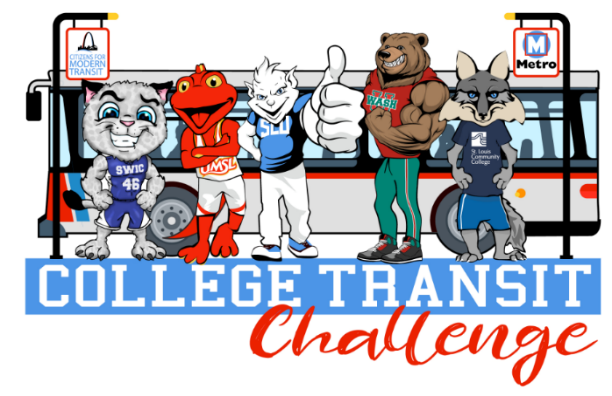 Public transit is a safe, cost-effective transportation option for people of all ages, and in the St. Louis region, it’s proving to be particularly viable for students. High school, college and university students accounted for nearly 2 million MetroLink and 1.6 million MetroBus passenger trips during the last school year. To underscore the advantages of a robust public transit system and further boost ridership among students, faculty and staff at higher education institutions, Citizens for Modern Transit, Metro Transit, Metro Transit Public Safety and the Bureau of Transit Police are teaming up with St. Louis Community College, Saint Louis University, Southwestern Illinois College, University of Missouri–St. Louis and Washington University in St. Louis to host the first-ever College Transit Challenge. On Wednesday, Aug. 28, those affiliated with the respective schools can help their college or university win by taking MetroBus or MetroLink that day. Ridership will be tracked via social media. Participants simply check-in at a Metro Transit Center – via Facebook, Instagram or Twitter – and post a status update or photo with #iTakeTransit, along with mentioning their school. (ex. #iTakeTransit @UMSL).

The school with the most ridership will be awarded bragging rights and a MetroLink Train Trophy. All College Transit Challenge participants will be entered in a prize drawing. Plus, those who show their Metro U-Pass to the Bureau of Transit Police and Metro Transit Public Safety Officers when traveling via MetroLink or MetroBus that day may receive a special prize.

“One of the goals of this challenge is to spotlight the fact that academic institutions are helping to support sustainable transit access through transit fare programming,” commented Taulby Roach, President and CEO, Bi-State Development. “More than 100,000 passes provide students, faculty and staff unlimited access for MetroBus and MetroLink trips during the school year through Metro’s U-Pass program. In addition to getting to and from campus, these passes can be utilized to gain free access to restaurants, shopping, employment opportunities, sporting and concert venues, and St. Louis culture. It’s safe, convenient and far more cost-effective than driving, paying for parking or utilizing on-demand ride services.”

College Transit Challenge partners are hosting a kick-off event at 8 a.m. at the Grand MetroLink Station. There will be formal remarks by Kimberly Cella, Executive Director, Citizens for Modern Transit; Taulby Roach, President, and CEO, Bi-State Development; Colonel Jon M. Belmar, Chief of Police, St. Louis County Police Department; Thomas F. George, Chancellor, University of Missouri–St. Louis; and Ashley Williams, a student from Washington University in St. Louis who regularly uses the local public transit system. Mascots from each of the participating schools, as well as other representatives, will also be on hand.

“This day-long effort is yet another opportunity for us to reinforce the key role a safe, integrated public transit system plays in providing access and opportunity to an array of resources, including education,” said Kimberly Cella, Executive Director, Citizens for Modern Transit. “We are grateful for our academic partners and look forward to a fun-filled day aboard transit.”

Take the Pledge. Get Involved. Make Plans to Take Transit on Aug. 28.