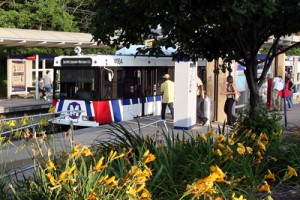 In 2012, CMT partnered with the Urban Land Institute to hold a Technical Assistance Panel, exploring development around the UMSL South MetroLink Station.  One recommendation of that panel was to build a new mixed-use street and corridor around the MetroLink station, to terminate the street in an event space, to brand the new mixed-use, Transit Oriented Development as “Plank Street Station” and use it as a catalyst site for and connector to the surrounding areas.

Leaders are now moving forward on some of these suggestions through what is now called the new University Square project.

University Square is an umbrella concept designed to:

Collaborations between the University of Missouri-St. Louis, North County Incorporated, Normandy, and the surrounding communities have laid the groundwork for this initiative which now includes a community development corporation and an Urban Redevelopment Corporation. UMSL will serve as the master developer on this plan.

Plans for University Square were announced at the opening of a new art project at the UMSL South MetroLink Station on Thursday, April 17th where an introductory flier was distributed to provide additional information.  You can read that flier and learn more about the plans here- University Square.

Please join CMT in celebrating this significant step forward for Transit and UMSL, North County, Normandy, and the entire region as a whole.