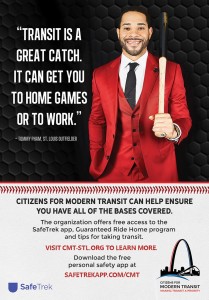 Throughout FY2018, transit was at the center of many regional discussions. The safety and security of the transit system remained at that the forefront, while details around expansion studies, investment/equity programming, a new service plan and the opening of the new MetroLink Station in the Cortex Innovation Community also created a lot of buzz. In addition, the East-West Gateway Board of Directors adopted a locally preferred alternative for the Northside-Southside corridor at their Aug. 29 meeting .

Citizens for Modern Transit (CMT) understands the significance of public transit and has spent more than three decades advocating in support of a safe, integrated and affordable system for the St. Louis region. The organization represents more than 22,000 constituents, including transit riders, major employers, academic institutions and labor and community organizations. CMT is continually working to establish, support and enhance programming and initiatives to help move public transportation forward, and 2018 was no different.   Other highlights of the fiscal year included:

It was a year marked by progress, and CMT looks forward to helping the region maintain this momentum.

As we head into FY2019, CMT will be focusing on three key areas of opportunity: working collaboratively to ensure the safety of the public on the system, rebuilding ridership numbers and maintaining financial stability for the organization. It will also be there as regional leaders prepare to make important decisions tied to the future of transit. With the support of members and riders, CMT will advocate for the identification of a priority expansion project along with the funding needed to make it a reality.