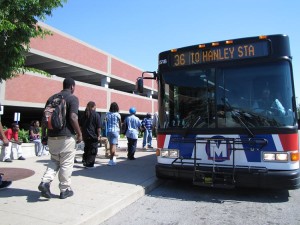 For more than three decades, Citizens for Modern Transit’s (CMT) advocacy work has positioned the organization as a strong and effective voice for transit.  And, FY2017 was no exception. Transit was at the center of many regional discussions, and CMT weighed in on a variety of topics ranging from safety and security of the system and expansion studies, to the highly anticipated ground breaking of the Boyle Street Station in the Cortex Innovation Community to the need to build upon transit investment and equity programming. While some of these conversations were difficult and somewhat uncomfortable at times, each played a necessary role in helping to unify the region and position it for further growth around transit. 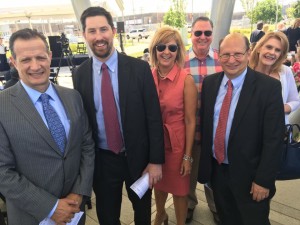 A few highlights from this year include:

As the regional transit advocacy organization, representing more than 20,000 riders, major employers, academic institutions, and labor and community organizations, we understand the impact of a solid public transportation system and the role it plays in creating jobs, providing access and equality and building a stronger economy and more vibrant neighborhoods.   This is why we did not hesitate to support efforts to develop immediate safety and security improvements earlier this year.

CMT will remain steadfast to this commitment in FY2018. We look forward to working with key leadership to further the establishment of a safe, secure, high-quality transit system for both current and future riders. Other key priorities for our organization will be implementing a comprehensive plan to help rebuild ridership numbers, selecting a transit priority project for the region and working to secure a funding package for capital investment and operating costs, which will require a coordinated push by local leaders for state support.

We will continue to keep our members and friends updated. In the meantime, you can:

We are honored to partner with you to improve the St. Louis Region with transit in Fiscal Year 2018.  We would not have the opportunity as an organization to achieve the highlights above without the support the CMT Board, our members, friends and volunteers. Thank you!

See more of what CMT accomplished in our 2017 Annual Report. 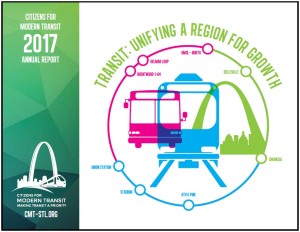