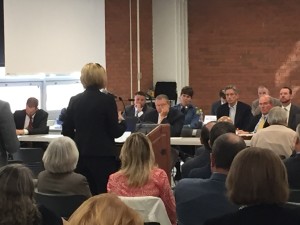 CMT Executive Director Kim Cella and other transit advocates from across the state talked about the importance of transit in Missouri as a part of their testimony to the Missouri 21st Century Transportation Task Force at their statewide meeting in St. Louis on Oct. 18.  The task force, outlined in HCR 47, is charged with creating a proposal for Missouri state transportation funding that will be introduced in January 2018.

Drew Brooks, Transit & Parking Manager for the City of Columbia, outlined impending service cuts to their system due in large part to a lack of funding sources.

“On October 30th, due to unfavorable budget trends, Our City will implement the largest service cuts to our bus system that we’ve ever performed since its creation in 1969. These service reductions will create real hardships for people traveling to work, medical appointments and school, that’s 1.5 million rides per year,” said Brooks.“ 70% of our budget is local funding, a combination of local transportation sales tax, fares, advertising revenues, and contracts with private and government entities. Approximately 30% of our revenue is from federal operating assistant grants . 4/10ths of 1% of our budget comes from state operating assistance. Over the last few years that amount has hovered around $25,000 annually. This covers about half of the salary and benefits of a SINGLE driver. We employ 85 drivers to provide this much needed service for our community,” Brooks added.

CMT Executive Director Kimberly Cella highlighted Missouri’s trend in transit funding over the past decade. “Transit funding in Missouri is going in the wrong direction.  Missouri transit funding was a little more than $8 million in state operating assistance in 2002.  This number has been on the decline ever since. This year transit providers saw the removal of all general revenue in the 2018 State Budget, reducing state operating funding to $1.71 million to be distributed among 34 transit providers.  Missouri ranks 46th in the country according to American Association of State Highway and Transportation Officials (ASSHTO) with regards to per capita funding for transit and falls far below many of our neighbors on the funding scale.” said Cella.

“We know the Task Force has discussed a fuel tax increase as one mechanism to generate revenues. We would advocate that this funding source needs to be one piece in a total transportation funding package because of the constraints in the Missouri constitution that prohibits the use of any gas tax revenues from being used for transit,” she added.

OATS President Dorothy Yeager and Executive Director of SMTS Denny Ward talked about the impact of their services in the rural communities.   Ward read from letters from some of his riders talking about their reliance on the SMTA service.