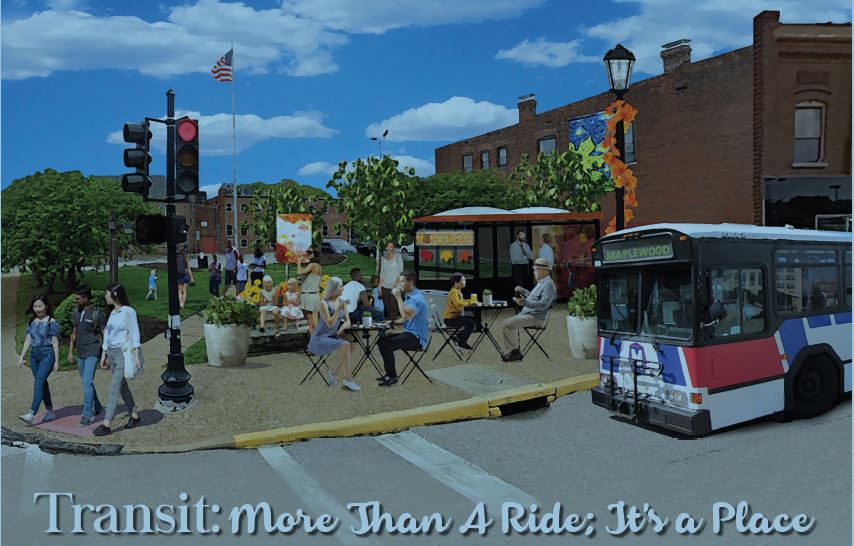 Citizens for Modern Transit and AARP St. Louis are working to activate the space around a Maplewood MetroBus Stop at the corner of Marshall and Manchester with the help of the City of Maplewood, Citizens National Bank and KaBOOM!, a nonprofit headquartered in Washington, D.C., that helps communities build playgrounds for children. This joint initiative, known as the “Transit Stop Transformation Project,” will transform the area at the southwest corner of Manchester Rd. and Marshall Ave. – adjacent to the Citizens National Bank parklet – into a fun, artistic space that encourages active play, cultivates community and increases transit use.

Public meetings are being held Tuesday, Oct. 15, from 5 to 7 p.m. and Wednesday, Oct. 16, from 9 to 11 a.m. at Foundation Grounds Coffeehouse & Cafe (7298 Manchester Rd, Maplewood, MO 63143, directly across from site) to determine what the community would like to see at the site. Maplewood area residents, business leaders and transit riders are encouraged to attend or provide feedback via an online survey  by clicking here.

The “Transit Stop Transformation Project” serves as an extension to Citizens for Modern Transit and AARP St. Louis’ ongoing efforts to raise awareness about “placemaking” around transit. This is a concept that transforms places people simply pass through in route to their next destination – like MetroLink and MetroBus stations – into active, engaging corridors that connect individuals and neighborhoods by offering access to products, services and green spaces.

“Over the last several years, CMT and AARP St. Louis, have hosted a series of Pop-up Metro Markets to help area residents experience what it would be like if they could meet friends for coffee, grab groceries or take time out to relax, unwind or play in the vacant spaces currently surrounding MetroLink Stations,” said Kimberly Cella, executive director of Citizens for Modern Transit. “We are very excited to be teaming up with the City of Maplewood, Citizens National Bank and KaBOOM! to be able to take an element of the ‘pop-up’ experience and turn it into a permanent installment at the Maplewood MetroBus stop.”

“We are thrilled at the opportunity to partner with Citizens for Modern Transit, AARP St. Louis and KaBOOM! The MetroBus stop at Manchester and Marshall borders Citizens National Bank Park in the heart of our Historical Downtown District and has served as a backdrop for many community gatherings. A new welcoming and inspiring space will be a wonderful addition for our community to engage not only with each other but those that may just be passing through Maplewood,” said Maplewood’s Community Development Director Laura Miller.

The 6 month process will kick-off in October with community meetings on Oct. 15 and 16.   Community  members are invited to attend the events or weigh in online.