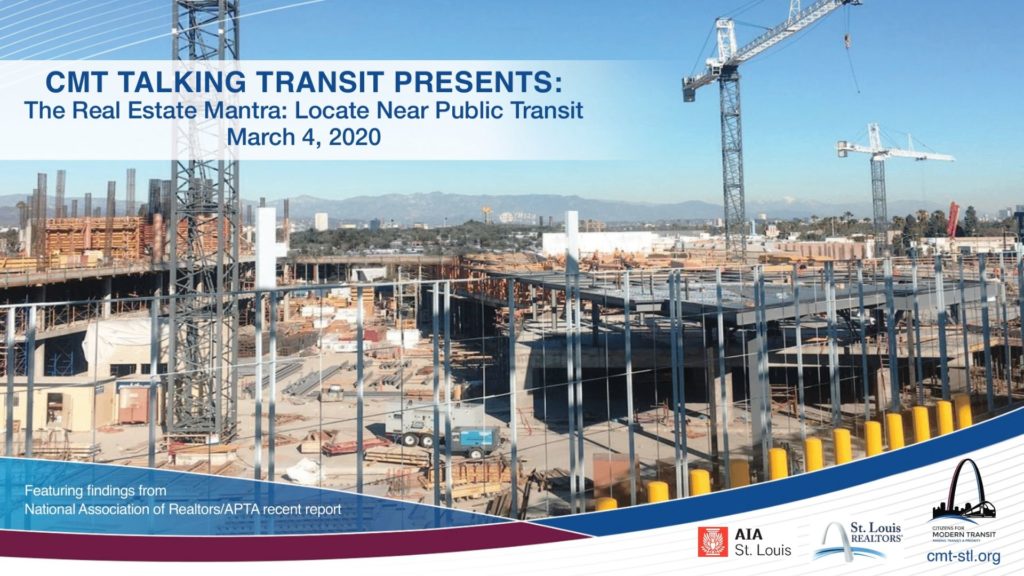 People in the St. Louis region know public transit creates jobs, promotes spending, and stimulates local economies; but they may not be aware that it also helps increase property values. Come learn more, as Hugh Morris of the National Association of REALTORS® (NAR) in Washington, DC, shares insight from a recent report, completed in partnership with the American Public Transit Association, at Citizens for Modern Transit’s (CMT) next “Talking Transit” event. It is being held on Wednesday, March 4, at 8:30 a.m. at T-REX, at 911 Washington, St. Louis, MO 63101.

Morris will showcase the performance of residential and commercial property sales between 2012 and 2016 in areas near fixed-guideway transit stations and those without public transit access in small, medium, and large regions, including Boston, Mass.; Eugene, Ore.; Hartford, Conn.; Los Angeles, Calif.; Minneapolis–St. Paul, Minn.; Phoenix, Ariz.; and Seattle, Wash. He will also discuss what this means for development near transit in the St. Louis market.

Citizens for Modern Transit is hosting this event in conjunction with the St. Louis REALTORS®, and the American Institute of Architects St. Louis Chapter. Registration can be completed online at www.cmt-stl.org. The cost is free for CMT, St. Louis REALTORS®, and  American Institute of Architects St. Louis Chapter members, and $10 for non-members. A limited number of scholarships are available to those with personal financial constraints.

Event registration fee is non-refundable unless the event is canceled or rescheduled by Citizens for Modern Transit.