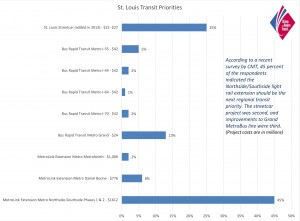 CMT recently conducted a survey  of St. Louis residents  to determine the top priority for transit for the region.  Light rail took home a winner.  Forty-five percent of the respondents indicated the number one transit priority for St. Louis should be the Northside/Southside MetroLink extension.

The transit options were taken  from East-West Gateway’s list of ‘illustrative’ projects – projects that have been deemed transit priorities for the region by the East-West Gateway Board of Directors (our elected officials) yet have no funding source behind them to implement the projects.   Second, with 25 percent of the responses, was the proposed St. Louis Streetcar project which would serve downtown St. Louis and midtown. This project was added to the list by the EAst-West Gateway Board in 2013.  Third with 13 percent of the votes was Bus Rapid Transit on the Grand line.  The Grand MetroBus line is currently the highest ridership line on the Metro system with crush loads.

The key issue with all of these projects is funding.  We know that transit is a priority for St. Louis.   St. Louis County voters demonstrated that in 2010 by voting yes to a half cent sales tax for transit in a down economy by an overwhelming majority.   Historically, projects built in the St. Louis region have been funded through a combination of federal funds and local match (infrastructure and local sales taxes). The Cross County light rail extension to Clayton and Shrewsbury was funded with local dollars only.  This was the last addition to the light rail system in 2006.

Currently, there is a one -cent transportation general sales and use tax being considered for transportation in MO in HJR 68/SJR 48.  This is a continuation of the discussion on transit funding from the last legislative session, but the key to support is that transit must get its fair share. St. Louis, Kansas City and other areas are seeing a demand for more transit.  Data shows that people are driving less,  millenials are demanding options to driving, and our baby boomer population is aging.

MoDOT’s long range plan identified four key areas of importance to Missourians – one was providing transportation choices.  In order to do just that, Missouri needs to find a way to fund transit.  Whether this is a sales tax, tolling, increased license fees or some other funding mechanism, transit needs to receive a significant piece of the funding pie.  St. Louisans indicated light rail is the top priority, Missouri needs to find a way to help fund it!