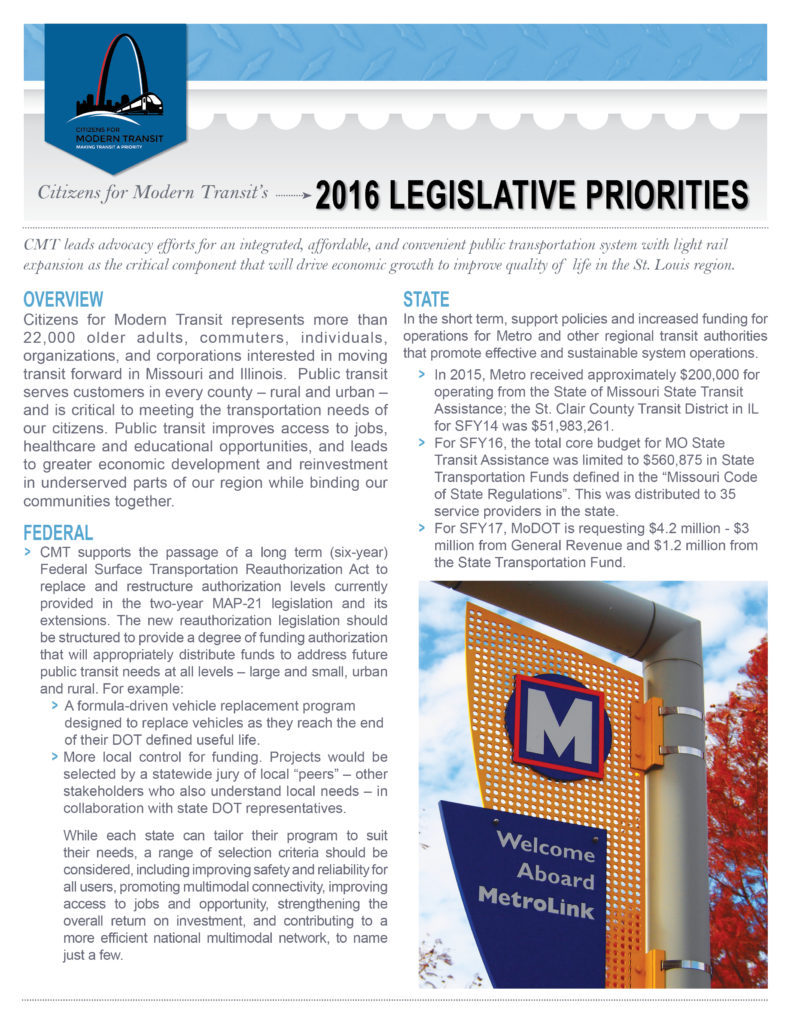 Transit funding, regional transit priorities and development top the list of CMT’s legislative priorities for FY16.  Citizens for Modern Transit recently released its FY16 Legislative Priorities.  CMT will be advocating for local, state and federal policies and funding for transit.

As is widely publicized, Missouri ranks near the very bottom with regards to state funding support for public transit nationally.  The recently released Ferguson Commission Report identified the creation of a state funding plan for transit as one of its key priorities.  Discussions are currently underway about funding for roads and bridges. Clearly there is an opportunity to broaden the discussion to transit and for Missouri to step up for transit.

Federally, CMT supported the passage of a long-term Federal Surface Transportation Reauthorization Act to replace and restructure the authorization levels articulated in the two-year MAP-21 legislation which has been extended numerous times.  President Obama signed a new five-year transportation bill into law in December, 2015. While there is $61 billion for transit over the five years, the new required matching formula is 50:50. One more reason the State of Missouri needs to step up for transit.

There are many ways for you to be involved with these efforts as CMT members and transit supporters.  1.  Please contact your legislators now as we head into 2016 to express your interest in transit funding.  2.  Continue reading CMT’s eblast and blog postings that will keep you updated on where things stand.  3.  Call, visit or email your state legislators about the need for a state funding plan for transit.  4.  RIDE TRANSIT, and invite others to get on board with you.

Thank you in advance for all you do to make St. Louis a better place to be with Transit!