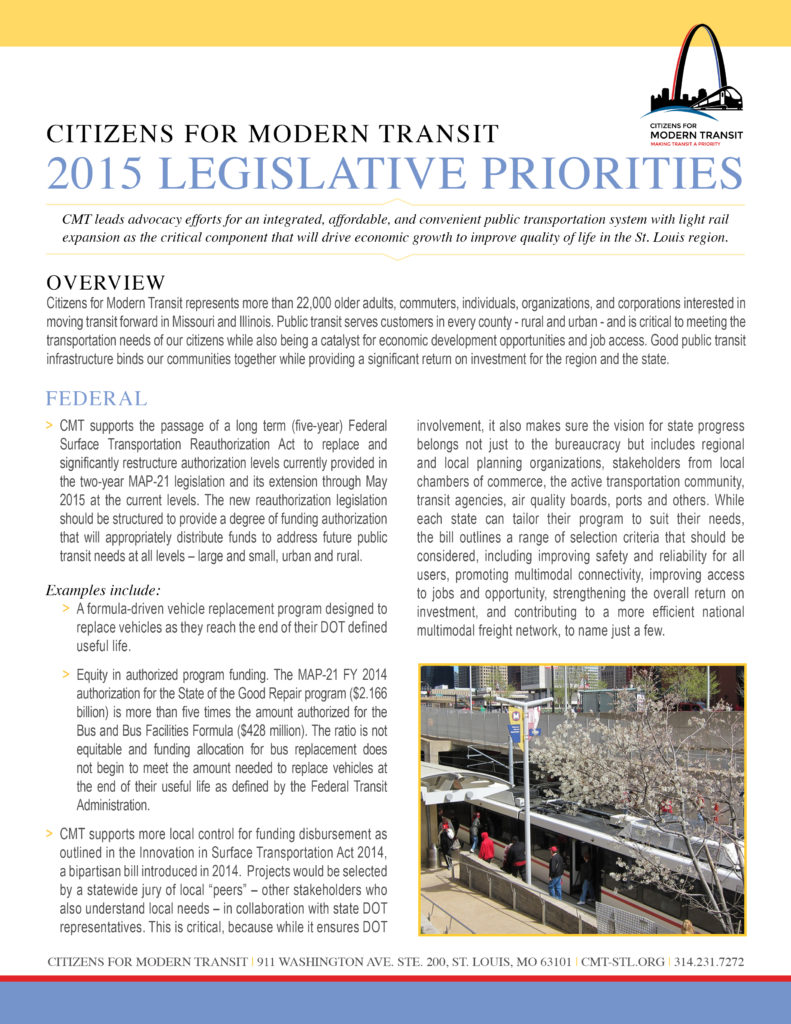 Transit, transit funding and development around transit are key to moving the St. Louis region forward.  Citizens for Modern Transit released its FY15 Legislative Priorities.  CMT will be advocating for local, state and federal policies and funding for transit in FY15.

As is widely publicized, Missouri ranks 36th in funding for public transit nationally, with 34 states and the District of Columbia ahead of Missouri.  Arkansas even spends more on transit funding than Missouri!  Clearly there is room for growth.

With that said, one of CMT’s priorities is to move forward the study to look at  possible funding sources for transit locally and statewide.  CMT will continue to advocate for Metro operations funding at the state level in the short term and adequate long term funding mechanisms into the future.  CMT will also be looking at funding Amtrak and high speed rail at the state level.

Federally, CMT supports the passage of a five-year Federal Surface Transportation Reauthorization Act to replace and restructure the authorization levels articulated in the two-year MAP-21 legislation which has been extended through May 2015.  CMT will be working with local legislators to keep this effort moving forward.

There are many ways for you to be involved with these efforts.  1.  Please contact your legislators when opportunities to express your interest in transit funding arise.  2.  Continue reading CMT’s eblast and blog postings that will keep you updated on where things stand.  3.  Look for the results of CMT’s funding study that will be announced in July of 2015 and weigh in on the options there.  4.  RIDE TRANSIT, but that’s all just the beginning.

Look and ask for big transit things to happen in 2015 and thanks in advance for all you do to make St. Louis a better place to be with Transit!