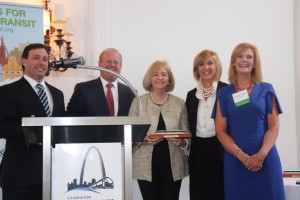 As part of its 33rd Annual Meeting held earlier this week, Citizens for Modern Transit (CMT) celebrated the incredible efforts of a local non-profit and a group of elected officials for their exemplary commitment to championing transit in the St. Louis area. During the event, AARP in St. Louis was recognized with this year’s New Initiatives Award, and St. Clair County Chairman Mark Kern, St. Louis City Mayor Lyda Krewson and St. Louis County Executive Steve Stenger were awarded with the 2017 Chairman’s Award. 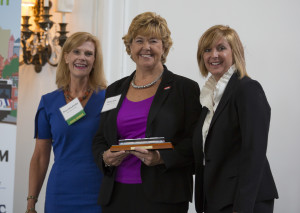 The 2017 New Initiatives Award was presented to Sheila Holm, community director with AARP in St. Louis, for the organization’s role in furthering the concept of livable communities and placemaking around transit. Through its partnership with CMT, AARP in St. Louis helped host walk audits at key MetroLink Stations, shared key report findings with the community, offered educational opportunities and planned pop-up Metro Markets. Efforts enabled area residents to gain a better understanding of ‘what could be’ if the space around transit stations was activated. AARP in St. Louis was also recognized for its role in helping to further transit programming through participation in the 2017 Great Race Competition and Ten Toe Express Program.

This past year, MetroLink safety concerns captured the attention of the entire St. Louis metropolitan area. And while there is no single answer to the safety and security issues impacting the regional transit system, an agreement by St. Louis City, St. Louis County and St. Clair County to jointly tackle safety issues in collaboration with Bi-State Development, is an unprecedented show of regional collaboration. CMT recognized St. Clair County Chairman Mark Kern, St. Louis City Mayor Lyda Krewson and St. Louis County Executive Steve Stenger with the 2017 Chairman’s Award for the establishment of a memorandum of understanding (MOU) in May, which outlines a comprehensive security plan delineating responsibilities for all law enforcement and public safety stakeholders to enhance passenger safety. The MOU also provides a framework to improve communication and cooperation between security personnel and public safety officers and is designed to reduce misconduct and incidences of criminal behavior.  This document is a giant step forward in achieving regional unity and in restoring public faith in the public transit system.

After the award was presented to the elected officials, they then provided those in attendance at the annual meeting with their 120-day update on the action items contained in the MOU signed May 17.

“We understand the impact of a solid public transportation system and the role it plays in creating jobs, providing access and building a stronger economy and more vibrant neighborhoods,” commented Kimberly Cella, executive director of Citizens for Modern Transit. “Today’s awards are a small token of our appreciation for the role AARP in St. Louis and our elected officials are playing to help unify the region around transit and position it for further growth.”