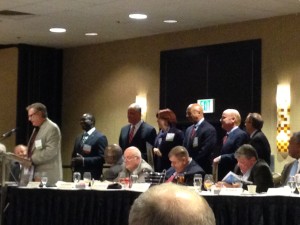 CMT was honored with an Outstanding Local Government Achievement (OLGA) Award from the East-West Gateway Council of Governments on November 14.   CMT Board Vice-Chair Nancy Cross stood with representatives from Cortex, the St. Louis Regional Chamber, the Board of Alderman, Metro, and St. Louis City to accept the East West Gateway OLGA Award for exemplary public/private or public/non-profit collaboration at East West Gateway’s Annual Meeting and Awards Ceremony.

Citizens for Modern Transit was recognized with this group for its leadership on the feasibility study for transit enhancements including a MetroLink station at the Cortex site.  CMT was also acknowledged for its cooperation with regional partners such as Great Rivers Greenway and Cortex to provide a local match of more than $100,000 to fund the feasibility study.  The study provided the basis for a successful TIGER application for $10.3 million dollars making the station a reality in the next several years.   This will be first MetroLink expansion since 2006.

Cortex is a not-for-profit organization working to position St. Louis as a regional, national, and international hub for technology research, development and commercialization.  It was founded in 2002 as part of a 25-year master plan to replace aging infrastructure and attract private development.  Its founding was made possible through investments by Washington University, BJC HealthCare, UMSL, St. Louis University, and the Missouri Botanical Garden.  The Cortex site itself is located in the Central West End and Forest Park Southeast residential neighborhoods and transit and multiple transportation options were key to its vision for success.