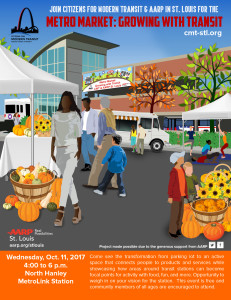 Transit Advocacy Organization was the Only Recipient in State of Missouri

Citizens for Modern Transit (CMT) is excited to announce it has been named a recipient of the first-ever AARP Community Challenge Grant program, which has invested $780,000 in 89 different community projects nationwide to help create change and improve the quality of life for people of all ages. CMT is the only recipient in Missouri to be awarded with this grant and will be using the funds to host a free, pop-up Metro Market at the North Hanley MetroLink Station in October.

The 89 winning projects represent all 50 states and the District of Columbia. Each ranges from low-cost, short-term actions such as the creation of temporary park spaces and murals to more sizable efforts such as the development of intergenerational playgrounds. AARP received almost 1,200 applications for Community Challenge funds, resulting in a highly competitive selection process. All projects are set to be completed by November 1, 2017.

CMT’s project at the North Hanley MetroLink Station will transform a transit parking lot into an active space that connects people to products and services. It will showcase how areas around transit stations can become focal points for activity featuring food, fun and more. The event will engage the community through a variety of different art mediums to determine what residents, stakeholders and community leaders would like to see around transit in St. Louis.

“CMT is honored to be a recipient of the AARP Community Challenge Grant, especially in light of the intense competition from across the country,” said Kimberly Cella, CMT Executive Director. “Planning for the October event is in full-swing with details set to be announced later this month.”