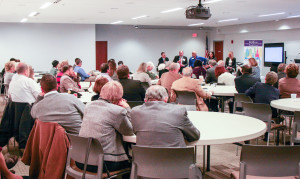 More than 85 CMT members, regional stakeholders and interested citizens explored ways to further unify the St. Louis community through the growth of the region’s public transit system at the CMT’s Panel Discussion:  “Unifying a Region through TRansit Growth.”  Special thanks to CMT’s sponsors including BJC Healthcare, DCM Group, and the St. Louis Regional Chamber.

In late Spring, 2017, elected officials, local stakeholders and community members created a collaborative network to address issues of declining ridership on public transit, including exploring ways to enhance security on the system.  This collaboration led to the first multi-jurisdictional Memorandum of Understanding that was signed by local elected leaders in MO and Il, and by the CEO of Bi-State.  The MOU laid out various action items, including the establishment of a transit advisory working group, a joint command center for delivery of security services, and a call for a robust safety audit of the system.  The establishment of the MOU was ground-breaking in that in created a framework for all parties to work collaboratively toward the goal of enhancing safety for public transit riders.

CMT Board Chair Rose Windmiller moderated the panel discussion.  Windmiller opened the program, “CMT seeks to expand on this concept of collective action initiated around safety and security.  Our panelists, each with a distinct area of expertise, will describe ways that transit can be a catalyst for positive change.  We will explore the following questions – how can we work together, as a community, to strengthen our current public transit system?  How are transit funding and operations’ decisions made?  How can stakeholders influence this process, and how can we drive scarce public transit resources in the most equitable manner?”

Dan Meyers, transportation consultant at AECOM, provided an update on the light rail planning and design efforts on the Northside/Southside study. “There is a demand for transit in this area and there is a need for transit,” stated Meyers. “Proportionally, more study area residents use transit to commute and don’t have access to a car, compared to residents across the city and region. We’re trying to connect people to jobs.”

Following the update,  the following regional thought leaders outlined transit’s impact beyond the trip from point a to point B.