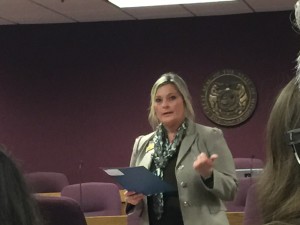 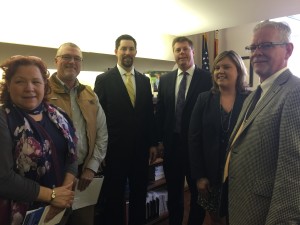 More than 30 CMT & Missouri Public Transit Association (MPTA) members carried the message door to door about the importance of transit and transit investment on Transportation  Day 2018 on Feb. 15. Dozens of legislators were contacted to talk about state supported investment of transit including MoDOT’s ask for next year of $3 million from General Revenue and $1.7 million from the State Transportation Fund.

“It is always important for us to be able to personalize the story of public transit in MO especially in light of the fact that MPTA transit provider members provide more than 62 million rides almost everywhere for everybody every day in Missouri, and they employ thousands in our communities.  Our legislators need to know the Faces of MO transit and its impact on our economy,” said MPTA President Dorothy Yeager as she welcomed delegates.

Throughout the morning, participants met with dozens of legislators. Then a special briefing was held with Rep. Kevin Corlew and MoDOT Multi-Modal Director Michelle Teel. Rep. Kevin Corlew was the sponsor of HCR 47 which led to formation of the 21st Century Transportation Task Force. Their report released in January included a recommendation for a dedicated funding stream for transit and Multi-Modal transportation. The report calls for $50-70 million annually for transit and multi-modal transportation and not generated from tax revenues.  Following Rep. Corlew, Teel talked about MoDOT’s commitment to transit.

“MoDOT has been a great partner on transit including their help in 2016  to provide an additional $1.15 million in operating funds out of the State Transportation Fund. This allocation helped to offset the loss of $500,000 last year from GR. This year MoDOT has requested $3 million in General Revenue and $1.7 million from the State Transportation Fund for transit service.   While our legislators may have dropped the ball over the last several years, we commend MoDOT’s efforts to keep up the ask, to continue to work withour members to find other sources of revenues, and to ensure transit is at the table,” said Kim Cella, Executive Director of CMT and the MPTA.