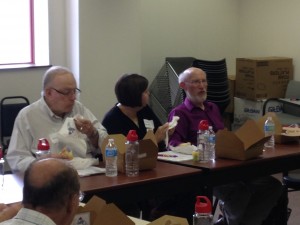 CMT’s MetroLink Monitor volunteers gathered for their annual meeting  to review their report findings from the year and to discuss Metro operations with Ray Friem, Metro’s Chief Operating Officer.

CMT’s MetroLink Monitor having been ‘watching and reviewing’ the St.  Louis light rail system for 12 years.  Volunteers visit MetroLink Stations throughout the region and assess how things are working.  They check the cleanliness and maitenance of the station, security, and much more.

Observations for the 2013 -2014 report included improvement of the East Riverfront and Forest Park MetroLink stations ; signage at the stations continues to be outdated (on the Missouri side more than the Illinois side), and Laclede’s Landing and Belleville Stations consistently lacked security. 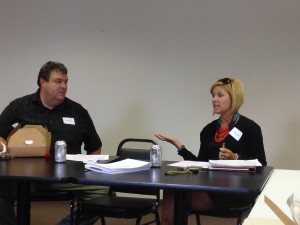 Mr. Friem then had the opportunity to respond and provided insights into the realities and challenges of operating the Metro system in St. Louis.

To report your findings about a station in the area, use the following webpage and we will incorporate your feedback into our reports to Metro.  You can give your feedback here – https://cmt-stl.org/programs/metrolink-monitor-program/.