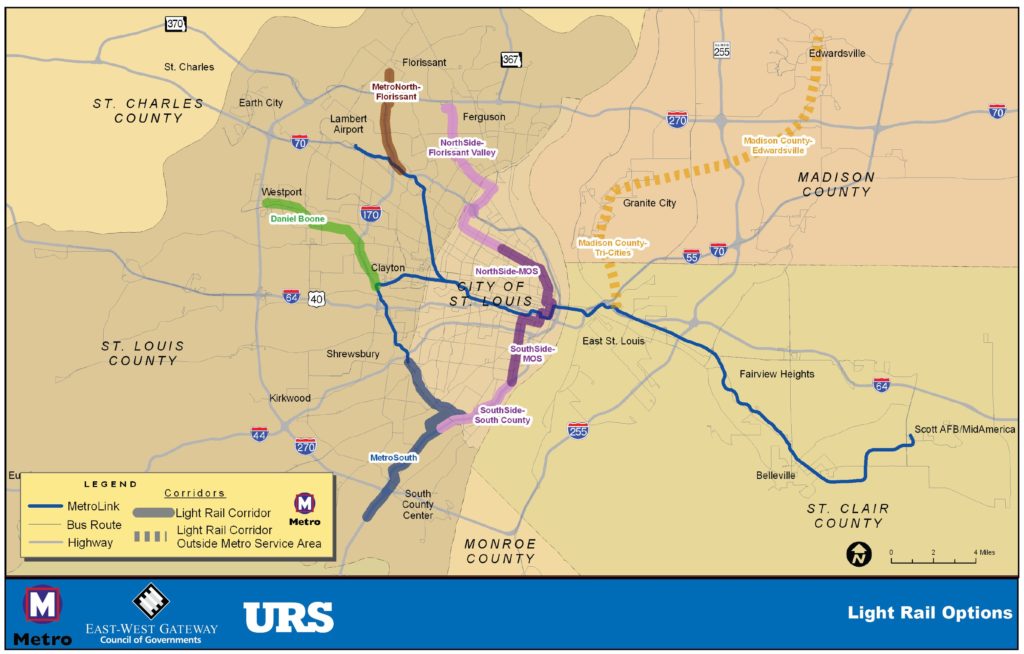 RESERVATIONS REQUIRED FOR THIS SPECIAL EVENT

CMT members will have the opportunity to weigh in directly with St. Louis County on the selection process for the County’s future light rail corridor study on September 2.   CMT will host the meeting for its members at the World Trade Center in Clayton at 5 p.m. as an opportunity to hear more details about the corridors being considered, as well as the opportunity to comment on the proposed study.

Residents of St. Louis County can also weigh in online .

Voters were promised in April 2010 that if Proposition A, the County half-cent sales tax, was passed, Metro would restore bus and rail service where it had been cut, as well as expand MetroLink. The proposed corridor study is necessary in order to apply for federal funds from the Federal Transit Administration (FTA) for light rail expansion. Also, in 2010, the St. Louis County Council passed Ordinance No. 24,264 requiring that MetroLink expansion shall only be pursued if federal funding is part of the funding mechanism for the project. Without federal funding, no future light rail expansion is possible. The corridor study will inform the community and the decision-makers about the possible location, costs, benefits, impacts, constructability and operational characteristics of the corridor under study.

Based on this information generated, a local recommendation on whether to advance a light rail project into the FTA New Starts program can be determined. Three previously-studied MetroLink corridors included in the region’s long range transportation plan, Connected 2045, are in St. Louis County.  Those corridors include Daniel Boone (Clayton to Westport), MetroNorth (North Hanley Station/Lambert Airport to Florissant) and MetroSouth (Shrewsbury to Butler Hill Road).  While Connected 2045 recommends each of these corridors as Tier II projects under the Illustrative Project list (projects that are regional transit priorities but have no funding), it does not specify which should receive priority.

Based on the input the County receives, County Executive Stenger has indicated at least one study will be conducted, and that there are potentially sufficient funds in the “Proposition A” account to conduct an additional study. The entire cost of the study (or studies) will be funded through the County sales tax fund, Proposition A. The study itself will take approximately 1 year to complete. The region must then decide what corridor to submit for light rail expansion to the FTA New Starts program — whether the corridor studied by the county, or another corridor. One important selection criterion from the FTA will be whether the proposed project will solve transportation problems.

Any study conducted will help the region evaluate which project corridors meet this and other FTA criteria that will increase the region’s chances of gaining funding from the FTA.

The meeting will begin at 5 p.m., and there is limited seating for this event at this venue.

CMT members will be required to RSVP in advance . The World Trade Center, 7733 Forsyth, 22nd Floor, WTC Training Room in Clayton.  This site is accessible via the Clayton MetroLink Station and MetroBus.

Weigh in online on what corridor you think is the best corridor in St. Louis County to examine for light rail expansion.