Citizens for Modern Transit (CMT) recently recognized several public and private organizations for their efforts to advance the development of new light rail in the St. Louis region. Awards were presented to BJC Healthcare, Washington University, the Cortex Innovation Community and Great Rivers Greenway, along with the City of Pagedale and Beyond Housing, during CMT’s 30th Annual Meeting last week at the Renaissance Grand Hotel in downtown St. Louis.

The Chairman’s Awardwas given to BJC Healthcare, Washington University, the Cortex Innovation Community and Great Rivers Greenway for their collaboration with CMT to successfully complete the Central Corridor Feasibility Study for the new MetroLink alignment near the midtown Cortex development. Last week it was announced that highly competitive federal grant monies have been secured by Metro and will enable the construction of this new MetroLink station to be located at Boyle Avenue and Sarah Street in the Cortex District. It will mark the first addition to the St. Louis light rail system since the opening of the Cross-County extension in 2006. These organizations provided leadership, time and funding to help ensure this project happened. Greg Patterson of BJC Healthcare, Mary Campbell of Washington University, Dennis Lower of the Cortex Innovation Community and Susan Trautman of Great Rivers Greenway accepted the award.

“The St. Louis region thanks this true public/private partnership for providing the level of commitment and enthusiasm it took to see this project to fruition, and for providing St. Louis a great opportunity to see local leaders out front advocating for the expansion of the transit system,” said Kim Cella, Executive Director of Citizens for Modern Transit. 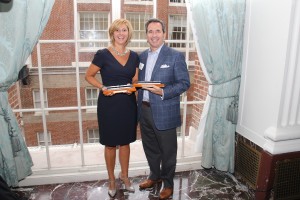 The 2014 New Initiatives Award was presented to the City of Pagedale and Beyond Housing for their work to pass form-based zoning to increase the opportunity for mixed-use, mixed-income developments around the St. Charles Rock Road MetroLink station. More specifically, the City of Pagedale’s Board of Aldermen passed an ordinance earlier in the year establishing “E – Transit Oriented Development Form-Based Zoning District” in the city’s zoning code. The form-based code for this new zoning classification was developed with input from the community, which was obtained through a community planning process facilitated by Beyond Housing, called Pagedale Determined. This process was made possible through a unique collaboration between the City of Pagedale, Beyond Housing, CMT and Metro, and will go a long way towards the advancement of development around MetroLink in this area. City of Pagedale Mayor Mary Louis Carter and the Executive Director of Beyond Housing, Chris Krehmeyer, accepted the award.

“The City of Pagedale and Beyond Housing are to be commended for their efforts,” commented Don C. Musick, III, chair of the CMT Board of Directors. “A significant step has been established that will open the door for good, right-sized development around transit in the St. Louis region.”

In addition to the new board members, new officers were elected to the board of directors.  Rose Windmiller with Washington University was elected Chair, Len Toenjes with AGC St. Louis elected Vice-Chair and Don C. Musick, III,  was elected Past Chair. Re-elected to the organization’s Executive Committee:

Citizens for Modern Transit is a not-for-profit organization in St. Louis whose mission is to expand the light rail system in order to build more sustainable, accessible communities in the region. www.cmt-stl.org.