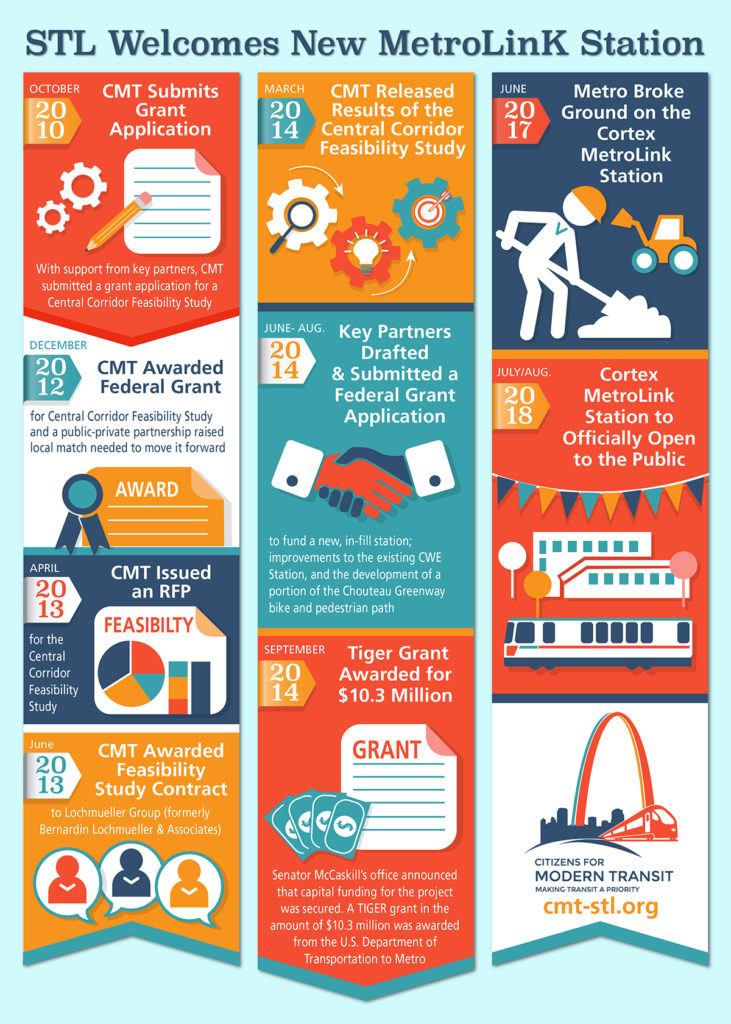 As Metro prepares to open the new Cortex MetroLink Station, Citizens for Modern Transit (CMT) would like to salute the transit agency, and the many others, who worked to make this development a reality. CMT is honored to have played a key role in this project, particularly in its early stages… Well done St. Louis.

With support from Washington University, BJC Healthcare, Cortex Innovation Community and Great Rivers Greenway, CMT submitted a grant application in October 2010 to conduct a Central Corridor Feasibility Study for a potential new, in-fill MetroLink Station between the Central West End and Grand MetroLink Stations at the site of the new Cortex Development

In the spring of the following year, CMT released results of the Central Corridor Feasibility Study. From there CMT, Metro, Washington University, BJC Healthcare, Cortex Innovation Community, Great Rivers Greenway and others worked together, drawing on Central Corridor Feasibility Study findings, to craft a federal grant application to fund a new, in-fill station; improvements to the existing Central West End Station, and the development of a portion of the Chouteau Greenway bike and pedestrian path.

Senator McCaskill’s office announced in September 2014 that the project was approved for capital funding and would receive a Transportation Investment Generating Economic Recovery (TIGER) grant, in the amount of $10.3 million from the U.S. Department of Transportation.

Metro broke ground on the Cortex MetroLink Station in June 2017 and construction officially began on the first addition to the MetroLink System since the opening of the Cross County Extension in 2006.

We are now excitedly awaiting the grand opening of the Cortex MetroLink Station this summer.

Check out this video with more information.